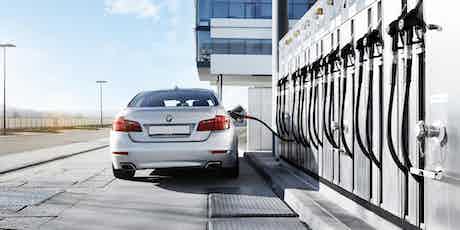 Alternative fuels are undoubtedly our future, but what’s the first to come to your mind? Electric cars are probably the first thing, and maybe hydrogen comes in second, but did you consider synthetic fuel? It’s not exactly a common technology, but synthetic fuels could be the answer to keeping petrol and diesel cars on the road in a more eco-friendly manner. How realistic are they, though? Read on for a guide.

What is synthetic fuel?

Synthetic fuel is effectively an eco-friendly replica of petrol or diesel, with the idea that internal combustion-engined cars would be able to run as they do now on fossil fuels but cut down hugely on CO2 emissions and harmful particulate matter.

The idea behind them is that they’re just like regular fuel — so you’ll go to a fuel pump, fill your car up and drive off — but without having to use non-renewable oil like petrol and diesel do to produce it. It’s lighter on CO2 as well, with the theory being that carbon produced by cars running it would then be used to create more fuel.

It’s not a new technology, with methods of producing it patented in the early 1900s, but it’s one that’s getting a bit more of a spotlight as the switch to alternative fuels accelerates.

How are synthetic fuels made?

There are a few methods used to make synthetic fuels. One of the most common at the moment is to take carbon dioxide or monoxide from the atmosphere and synthesise it with hydrogen taken from water.

It’s also possible to create them from biomass, such as burning logs and other plants and turning them into a gas which is then blended with hydrogen, albeit in a more complicated manner than say making a smoothie in your kitchen.

Is synthetic fuel renewable and eco-friendly?

Yes, synthetic fuel is renewable, but whether it’s eco-friendly depends on how the processes of making it are conducted. As it requires a lot of energy to make them, using electricity or other fuels from non-renewable sources may counteract the point of synthetic fuels in the first place.

In theory, the CO2 used to produce synthetic fuels would equal the amount pumped into the air by cars burning it, therefore making it CO2 neutral to run on.

Do any new cars run on synthetic fuel?

At the moment, you can’t buy any cars that will run purely on synthetic fuels — mainly as it’s not commercially available just yet. Manufacturers are ramping up the development of these fuels though, with Porsche one of the leaders. Mazda are also part of an ‘efuel alliance’ working on the tech, so it may not be too long before you can fill a new car up with synthetic fuel.

Can my petrol or diesel car run on synthetic fuel?

The idea is that synthetic fuels will get to the point that you’ll be able to run them on any existing petrol or diesel car, though that’s some way off at the moment. In current forms, synthetic fuels would need to be mixed in with petrol and diesel much like ethanol already is. It’ll be some time before a full tank of synthetic fuel becomes a realistic purchase.

Will synthetic fuel be expensive?

At the moment, synthetic fuel would be very expensive if you were able to go to a forecourt and fill your car up with it. It’s estimated it would cost about £4 per litre — almost four times as much as petrol, and way more than charging an electric car for the equivalent amount of range.

As with most things, further development of synthetic fuels would see those costs come down but don’t expect it to happen anytime soon.