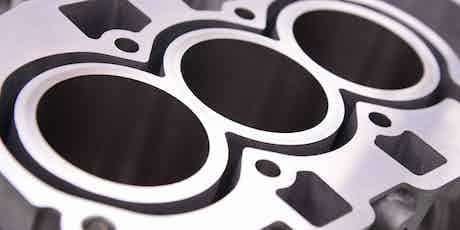 If you’ve been browsing our comprehensive reviews, you might have come across terms like ‘four-cylinder’, ‘V8’ or ‘straight-six’. You might know it’s something to do with the engine, but what does it mean exactly, and what difference do different ones make? We explain all in this hand guide.

What do car engine names mean?

If your eye has been caught by a new model, put it in our car configurator to see how much carwow could help you save.

An engine’s layout can vary for a number of reasons, often in order to either improve the ease with which the engine fits beneath the bonnet, or to improve its smoothness or even fuel efficiency. Here are the most common configurations…

Inline: All the engine’s cylinders are arranged in a line, facing upwards and usually perpendicular to the car. This configuration is found in the vast majority of family hatchbacks and smaller cars. This term is often used interchangeably with ‘straight’ below.

Straight: Like inline, but the cylinders are positioned in parallel with the car from front to back as opposed to across the engine bay. This layout is frequently used in premium cars, especially BMWs.

Vee: When viewing the engine from the front, the cylinders are arranged in a ‘V’ shape. Each bank of cylinders faces outwards, and drives a common crankshaft at the base of the Vee. This style is generally the reserve of premium and high performance cars because it allows you to squeeze more cylinders into a smaller space compared to inline units.

Flat: Also known as ‘boxer’ or horizontally-opposed engines. The cylinders are laid down on their side in two banks and point away from each other (picture two boxers standing back-to-back and punching outwards). This helps to keep the centre of gravity low, usually to the benefit of handling. Only two car companies currently use flat engines in their ranges – Porsche and Subaru.

VR and W: The VR engine was developed by the Volkswagen Group. It uses a similar principle to V engines but the distance between the two rows of cylinders is so narrow that they’re squished together in one block. A W configuration joins two banks of VR engines together at their base. VR engines are rarely used now, though W engines feature in cars such as the Bentley Mulsanne.

Read our Bentley Mulsanne review
Rotary: Rotary engines aren’t used in new cars anymore, however they were previously used by Mazda in sports cars such as the RX8. Rotary engines are unique in that they have no pistons, instead opting for a triangular rotor which spins inside one large cylinder. Car enthusiasts love the smooth power delivery, however they are expensive make and this is why they’re not used as much these days.

Like the cylinder arrangement, the number of cylinders can be chosen for numerous different reasons, including power, fuel efficiency, and even the noise they make.

Twin cylinder: Only used for very small capacity engines. No manufacturer is using twin cylinder engines anymore, however Fiat used one in the 500 until recently

Three cylinder: Generally used in smaller cars, though the likes of the Ford Focus and Peugeot 308 make use of turbocharged versions to improve power output without sacrificing fuel efficiency.

Four cylinder: This is the most common arrangement and is almost always fitted in an inline configuration.

Five cylinder: These units are rare these days, until recently they were found in a few Volvos and the Audi RS3 and RS Q3. They make a distinctive ‘warble’ sound thanks to their odd firing order.

Six cylinder: These engines are frequently used in many premium cars, in both straight and V formations. They make a higher-pitched, racier sound than four- and eight-cylinder engines. Some top-level supercars, including the Ford GT, are using this layout with big turbos to produce the kinds of power that used to require eight or more cylinders.

Eight cylinder and above: V8, V10 and V12 units are used in supercars and luxury saloons. Some top-end Volkswagen-group cars use W12 engines and the Bugatti Veyron used a W16 unit.

Some engines use turbocharging or supercharging to force more air in and create more power. This allows smaller engines to create similar power to larger ones and can increase efficiency.

Turbocharging: A turbocharger is a small turbine attached to the engine. Exhaust gases are forced through the turbo and spin the turbine, compressing the air coming into the engine. This compressed air contains more oxygen, therefore creating a bigger explosion when it’s forced into the engine and making more power. Turbos started out on sports cars as a way to make more power, however recently they have made their way onto smaller cars to increase their efficiency.

How does a car engine work?

Let’s quickly run through how an engine works. Power is generated when a mix of fuel and air is pumped into an engine’s cylinder. The mix is ignited by a spark, causing a small explosion. This happens across an engine’s numerous cylinders, thousands of times per minute. In each cylinder, a piston moves down as a result of each explosion and that force is sent through the gearbox to the wheels.

What engine size do I need?

Generally, two factors affect how much power an engine produces – the volume displaced by each cylinder – i.e how small or large the engine is – and how many cylinders the engine has. If all other factors remain equal – more numerous and larger cylinders should produce more power, than fewer, smaller ones. It’s these cylinders that are being referred to when terms like V6 are mentioned.