What is a DSG gearbox and how does it work? 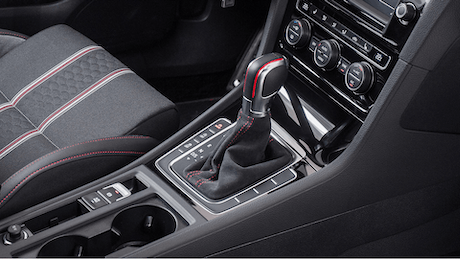 If you’re looking for an automatic car, you may hear references to a DSG gearbox. But what is one, exactly?

A DSG (Direct Shift Gearbox) is a type of dual-clutch gearbox used by several manufacturers within the Volkswagen Group, including Audi, Skoda and SEAT.

It works in a very different way from a conventional automatic gearbox but you might not notice the difference while driving.

How does a DSG gearbox work?

Instead, they use a device called a torque convertor. This sends the engine’s power to the gearbox when you press the accelerator, but it separates the two to let the engine tick-over independently when you stop the car.

DSG gearboxes take a different approach. They feature a pair of electronically controlled clutches that the car can engage or disengage automatically.

One clutch is used to transmit the engine’s power through the gearbox to the car’s wheels. While this is happening, the car’s onboard computer predicts which gear you’ll need next and uses the second clutch to get that gear ready.

When the computer decides it’s time to change gear, it simply tells the gearbox to disengage one clutch, and engage the other, therefore changing gear.

The gearbox takes control of the clutches itself — you don’t need to worry about that.

What are the advantages and disadvantages of a DSG gearbox?

Advantages of a DSG gearbox

Disadvantages of a DSG gearbox

How to drive a car with a DSG gearbox

Driving a car with a DSG gearbox is no different to driving any other automatic, really.

From that point on, just focus on using throttle and brakes. When at a stop, hold your foot on the brake to stop the car from creeping forward. When you want to go again, gently lift off the brakes.

When you’re finishing driving, bring the car to a complete stop while holding your foot on the brake. Switch the gear selector into ‘P’ and put the handbrake back on to stop the car from rolling.

You do have the option to change gears yourself when using a DSG gearbox too, albeit without the need to operate a clutch pedal. You can control exactly when the car changes gear using paddles on the back of the steering wheel marked ‘-’ and ‘+’.

You’ll find ‘-’ on the left, which is used for downshifts, while ‘+’ is on the right and used for upshifts.

Alternatively, some models allow you to change gears through the selector itself.

Which cars have a DSG gearbox?

DSG gearboxes are used by brands under the Volkswagen Group. This includes Volkswagen itself, as well as Audi, SEAT, Skoda, Bentley and even Lamborghini among others.

You’ll find the vast majority of cars from these brands are available with DSG gearboxes.

What’s the difference between a DSG gearbox and other automatic gearboxes?

Conventional automatic gearboxes use a device called a torque converter when changing gears rather than a clutch.

DSG gearboxes use a dual-clutch system that pre-selects gears.

Is a DSG gearbox easier to drive than a manual gearbox?

In theory, a DSG gearbox should be easier to drive because you don’t have to worry about changing gears yourself.

Does a DSG gearbox use more fuel than other gearboxes?

As with all automatic gearboxes, DSGs tend to use more fuel than manual equivalents. DSGs are comparably more efficient than torque converter automatics, though.

Newer DSGs tend to be as reliable as any other gearbox. Owners of models from the early 2000s have reported issues, but these look to have been ironed out over time.

As with anything, proper maintenance will help the reliability of a DSG gearbox.