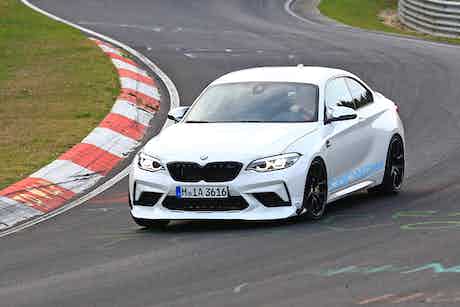 The much anticipated BMW M2 CS has been spotted putting a shift in at the legendary Nurburgring in Germany. Read its price, specs and release date, here

The BMW M2 CS – the fastest version yet of BMW’s pocket-rocket coupe – has been spotted testing at the Nurburgring. It gets a purposeful body kit, weight saving, big brakes and a more powerful version of the raucous, twin-turbo 3.0-litre straight-six that’s fitted to the M2 Competition. Form an orderly queue…

Or maybe hold off queuing for now – the BMW M2 CS is unlikely to land in showrooms until at least the middle of next year. Why? Well, BMW’s keen not to spoil sales for the recently launched and slightly less appealing (all things being relative) M2 Competition. When it does go on sale, expect the CS to cost about £50,000 or a premium of around £10,000 on top of the Competition model.

BMW has a reputation for styling its cars conservatively, even M cars like the M3 and M5 are discreet. Expect the M2 to be different, though, it’ll likely appeal to younger buyers and enthusiasts who are more open to the idea of an aggressive (some might say ‘boy racer’) body kit.

And if you don’t believe us, check out the damage on the lower-half of this test car’s front bumper, which would appear to be quite literally ground-scrapping. Those huge air vents ahead of the front wheels also point towards a need to cool bigger brakes.

A theory that seems to be confirmed in these profile pics which showa larger brake discs and calipers, hidden behind lightweight, thin-spoked alloy wheels that also look to be bigger than the ones fitted to the M2s. As we have already seen in the M3 CS, BMW is likely to fit the M2 CS with high-performance tyres made from a grippier rubber compound.

The most obvious change is reserved for the back of the car, where the subtle boot spoiler of the standard M2 has been replaced by a much less apologetic wing. And you can expect the M2 CS to also sound less apologetic – again following the same formula as the M3 CS.

Just like the outside, the M2 CS’ interior will be a hint more aggressive than the standard car’s. That’ll take the form of new body-hugging sports seats and a gear shifter and steering wheel finished in Alcantara. A few ‘CS’ badges will complete the job.

While you’re inner boy racer will welcome the M2 CS’s punchier looks, it’s good to know the meat in its sandwich comes in the form of the same twin-turbocharged 3.0-litre straight-six that is fitted to the BMW M3. It’s not the first time the M2 has got this engine – you also get it in the M2 Competition – but in the CS it’ll be tuned to produce 431hp, 23hp more than you get in the Competition.

Given that the same engine feels ludicrously quick in the larger and heavier M3, one can only imagine the crushing performance it’ll deliver in the CS. An educated guess would give it a 0-62mph time of close to four-seconds dead and a top speed of 180mph, should BMW be kind enough to delimit it.

To help you keep a steady hand on the tiller, BMW will likely give the CS an upgraded stability control system that’ll allow for long arching drifts without you needing to worry about losing control. Updated software for the car’s clever, grip-finding differential will measure power to the back wheels, while stiffer suspension – possibly with adjustable dampers – will help reign in body lean.

We’ll have a full review and video of the BMW M2 CS as soon as we can lay hands on one – bookmark this page or sign up to the newsletter at the top of the page to be notified when we do.