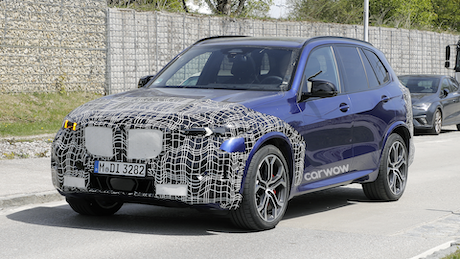 An updated version of the BMW X5 has been spotted, which should bring a tweaked design and more tech. Read on for full details.

The new BMW X5 has been spotted testing, and it seems as though the SUV is earmarked for visual tweaks as well as interior upgrades.

This alternative to the Mercedes GLE and Audi Q7 may be revealed later this year before going on sale in 2023.

The minimal camouflage on this test car suggests subtle changes for the new BMW X5. You can see the slim new headlights, which look similar to those found on the BMW 4 Series.

A revised front bumper is on the cards, too, and those huge kidney grilles look set to stay. The more powerful BMW X5 M will get a more aggressive front end look with a deeper and lower bumper.

Changes to the rear of the X5 seem even more subtle, with some new LED lights and a tweaked bumper. The X5 M gets some quad-tailpipes for a more sporty look.

It’s likely that the new BMW X5 will get the same freestanding dual-screen infotainment system found in the BMW iX and BMW i4.

This will take the place of the current digital drivers display, with a huge flat screen integrating both the infotainment and drivers information.

No shots of the interior have emerged yet so it’s hard to say for sure what else will change, but expect some new trim options and perhaps a new control layout.

The new BMW X5 should be available with a similar range of engines as the current car.

That should mean its 3.0-litre straight-six petrol engine is retained along with a selection of diesel options. The plug-in hybrid version should carry over too.

The prototype pictured above is the high-performance BMW X5 M, which will probably retain its 600hp twin-turbo V8.

A hydrogen-powered version of the current X5 is set for limited production, but it’s unclear whether this will be continued for the updated car, or whether it’ll go on sale in the UK.

Expect to see the new BMW X5debut later this year, with order books opening up at the start of 2022.