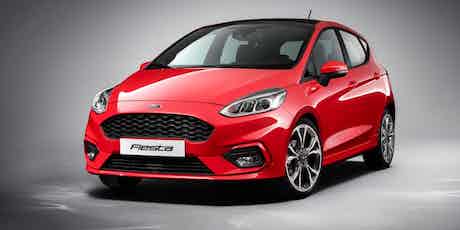 The Ford Fiesta is set to be better equipped, more refined and more fun than ever before with an all-new model. Here’s what you need to know

Ford has revealed the new Fiesta – a model with a tough act to follow. The current model has been the best-selling car in the UK since 2008 and Ford hopes its replacement will boast improved cabin quality, more space and even better driving characteristics.

Ford has chosen not to take a radical approach with the next Fiesta’s styling. Instead, it’s used a familiar shape that merely tidies up the old car’s slightly fussy details. The biggest change is at the back – the old model’s vertically-stacked tail lights have been replaced with horizontal units that tie in more closely to the rest of the Ford range.

The next Fiesta is set to offer buyers extra scope for personalisation, thanks to four contrasting finishes for the door mirrors and roof panel. The new Fiesta has grown slightly overall – it’s 71mm longer and 12mm wider while the wheelbase growing by 4mm.

Ford is keen to stress the jump in cabin quality in the new Fiesta, claiming class-leading materials, seamless joins between parts of the centre console and more robust seating upholstery.

Where the current car is blighted with a button-laden dash topped off by a tiny low-res screen, the new model is brought kicking and screaming into the modern world by an eight-inch touchscreen infotainment system – or a 6.5-inch screen in cheaper models – that almost halves the old car’s button count.

Running on Ford’s SYNC 3 system, menus can be navigated by pinching and swiping motions on a screen which Ford says is class-leading in terms of both resolution and brightness. To complement the contrasting exterior colours, there will be five colour options to spruce up the instrument panel surrounds, door pulls and rear view mirror cap.

The added size on the outside has resulted in extra practicality inside – knee room in the back has grown by 16mm, while the glovebox and door pockets are larger than ever. There’s no official figure disclosed about the boot volume yet, but the opening is wider than before to make loading easier.

Under the bonnet, there’s a choice of five petrol and two diesel engines to choose from. The range kicks off with a new 1.1-litre petrol. Replacing the 1.25 of the current model, the three cylinder is available with either 69hp or 84hp. The current EcoBoost unit is carried over to the new car, with 99, 118 and 138hp outputs, though subtle tweaks are said to improve overall efficiency.

Diesel choice comes in two flavours of a 1.5-litre unit, with either 84hp or 118hp. All engines get fuel-saving stop/start tech, and are mated to an all-new six-speed manual. An optional a six-speed auto is available with the 99hp EcoBoost.

Ford claims that the entire driving experience has improved beyond even the already impressive current car. 10 percent more cornering grip, eight per cent shorter stopping distances and better steering feel are all promised while improving ride and refinement.

The claims of improved cornering come with news that the Fiesta will likely be offered with a torque vectoring system that can brake individual wheels in bends, while a stiffer chassis has also played a part. This, combined with better sound deadening and a specially treated windscreen have helped the cabin to be quieter than ever.

It’s set to be safer, too, thanks to a total of 15 driver assistance systems, many of which are a first for the supermini class. Two cameras, three radars and 12 ultrasonic sensors help all the onboard safety tech work together.

A pedestrian detection system can autonomously brake the car if an imminent hazard is spotted. It can detect obstacles up to 130 metres ahead and, by detecting disturbances in the headlight beams, it can work at night, too. Ford’s park assist system is fitted to the Fiesta for the first time and is capable of braking itself to avoid low-speed bumps.

Extra safety tech includes a traffic sign recognition system and Cross Traffic Alert – a system that warns the driver of other vehicles when reversing out of a parking space. The result of all this wizardry is a predicted five-star Euro NCAP safety rating.

Standard kit levels have increased over the outgoing model, with a DAB radio, two USB ports and Bluetooth connectivity all standard. Style and Zetec models kick off the range, followed by the Titanium, which features automatic air conditioning, electric windows all round and cruise control.

The ST-Line will be the sportiest model in the lineup from launch – a full-fat replacement for the ST will arrive at a later date. A firmer suspension setup is complemented by more aggressive bumpers front and rear, deeper side skirts and a honeycomb grille design. Inside, the ST-Line gains sports seats, alloy pedals and a flat-bottomed steering wheel.

Just like several of Ford’s larger models, the Fiesta will gain a posh range-topping Vignale version. It’ll set itself apart from other Fiestas thanks to 18 inch alloy wheels, exclusive exterior touches and colours and hexagonal quilting on the leather seats. A first for the Ford range is the Active trim level. The crossover-lite model, complete with a raised ride height, roof rails and extra plastic cladding, will be rolled out on other Ford models in future.

Extra fancy options include a heated steering wheel, an openable panoramic glass sunroof and a B&O sound system – all 10 speakers and 675 watts of it.

Prices have yet to be released for the new model, though they’re expected to increase slightly from the current car’s £12,000 price point. The new model is set to hit showrooms in 2017.