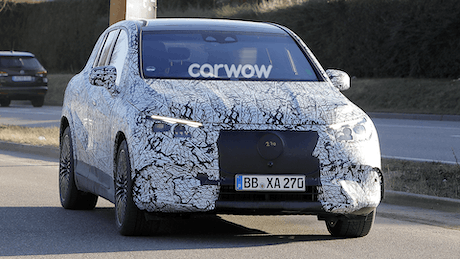 A new all-electric SUV based on the Mercedes EQE is on the way, with a high-performance AMG version following suit. Read on for everything known about it so far.

Spyshots have emerged of the upcoming Mercedes EQE SUV. This SUV of the EQE is set to go on sale in 2023, with an AMG version to following soon after.

This alternative to the Tesla Model X will be based on the recently-revealed EQE saloon but will feature a taller, more practical SUV-inspired body, much like the upcoming EQS SUV.

This spot by Instagram user race365 of the Mercedes EQE SUV in prototype form is the most exposed yet. It’s dropped the regular camouflage for orange and white wrapping, though its grille is still all taped up.

As a result, some finer details are more obvious now. Note the front bumper follows the usual Mercedes format of two smaller intakes flanked by a sweeping bit of trim.

For the rest of the car, you’ll need to rely on earlier prototypes though. Straked brake lights are visible at the rear, and massive alloy wheels seemingly designed with aero efficiency in mind make an appearance on this prototype too.

You can expect the interior of the Mercedes EQE SUV to be more or less the same as the saloon, albeit just with more space.

That’ll mean a plethora of plus materials dotted throughout, along with luxury trinkets like customisable ambient lighting and a glass panoramic roof.

It’ll seat five, and probably with space more akin to a GLS SUV than a GLE thanks to its flat floor.

You’ll get the option of Mercedes’ ‘Hyperscreen’ infotainment, which sees the whole dashboard transformed into one giant screen.

The Mercedes EQE SUV will likely come with a 90kWh battery, just like the EQE saloon. In that car, it’ll give you around 410 of range on a full charge. Expect that number to dip below 400 for the SUV as a result of its larger size. Somewhere around 380 miles seems a safe bet.

It should support 170kW rapid charging too, adding 155 miles of charge in about 15 minutes.

Expect the Mercedes EQE SUV to have the same launch model as the saloon. That being the EQE 350, which sees a single electric motor mounted at the back driving the rear wheels, producing 292hp and 350Nm of torque.

This prototype looks to be an upcoming high-performance Mercedes-AMG EQE SUV. It’s likely it’ll be called the AMG EQE 53 SUV (to mirror the new EQS 53 saloon) but could also wear a 43, 55 or 63 badge.

Though its camouflage does remarkably well to hide finer details, the biggest giveaway for this AMG model is its massive alloy wheels. They look near-identical to those found on the AMG EQS 53 saloon.

You could argue that’s just a case of fitting new wheels to the model. That said, a lower ride height and subtle addition of new fins to the bumper give a clearer indication this is no ‘ordinary’ Mercedes EQE SUV.

It’s likely the new AMG EQE SUV will use the same dual-motor setup as the AMG EQE 4 and 53 models.

This means entry-level 43 cars should have 476hp, while top-spec 53 versions will bring 626hp to the party. Expect the AMG EQE SUV 43 to manage a 0-60mph sprint in the region of 4.5 seconds and the AMG EQE SUV 53 to take around four seconds flat.

Expect the Mercedes-AMG EQE SUV to follow the regular EQE’s 2023 expected arrival. Pricing will likely be in excess of £100,000.

Expect the Mercedes EQE to be revealed in the middle of this year, and go on sale in 2023.

Pricing could start around £70,000, and rise significantly for eventual dual-motor cars.

Ready for a new electric SUV? Take a look at the best on sale now