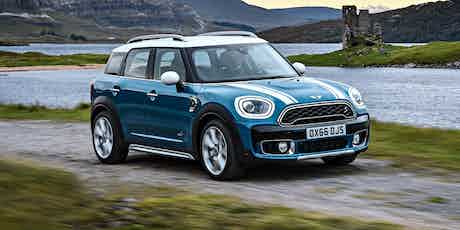 The Mini Countryman’s all-new replacement has been revealed. Changes include revised styling, new equipment and the option of a hybrid model – a first for the British brand. Read on for full details.

The new Countryman takes the outgoing model’s chunky styling and adds a host of new chrome and contrasting black trim pieces. Numerous air intakes in the front bumper are joined by a broad moustache-like black insert while silver kickplates and a new rear diffuser lend the 2017 Countryman a sportier appearance than the car it’ll replace.

Its boxy profile, instantly recognisable roofline and thick black wheel arch trims have all been carried over mostly unchanged, however, while a familiar range of personalisation options will be offered to buyers who want their car to stand out from the crowd.

The new Countryman is 20cm longer and 3cm wider than the outgoing car and, as a result, offers improved interior space for both front and rear seat passengers. Boot space also benefits from a helpful boost, too. The new car can comfortably accommodate 450-litres of luggage with the rear seats up – fold them down and you’ll find its commodious load bay grows to an impressive 1,309 litres – 220-litres more than the old car.

The Countryman’s cabin looks fairly similar to the old car – its square air vents no longer mirror the central console’s circular porthole design, however. The touchscreen infotainment system can now be specced with a larger 8.8-inch display as part of Mini’s new Wired tech package.

The biggest and, for some buyers, the most exciting Countryman news is that the 2017 model will be offered with a brand new hybrid system. A compact three-cylinder petrol engine – shared with the BMW 2 Series Active Tourer – is paired with a powerful electric motor and a large battery pack to help return as much as 135mpg. Its minimal CO2 emissions – as little as 49g/km – mean this spacious SUV is free to tax and congestion charge exempt, too.

The rest of the range will be offered with Mini’s efficient 1.5-litre petrol engine, a more powerful 2.0-litre unit – in Cooper S guise – and a range of 2.0-litre diesel options. Four-wheel drive is available on all cars in the 2017 Countryman range but will set you back an extra £1,600.

The new model will cost significantly more than the car it’ll replace. Entry-level models will cost £22,465 – undercutting the Audi Q3 – while top-spec models could set you back more than £35,000. This new car will make its public debut at the Los Angelis Auto Show in November 2016 and will go on sale in February 2017.