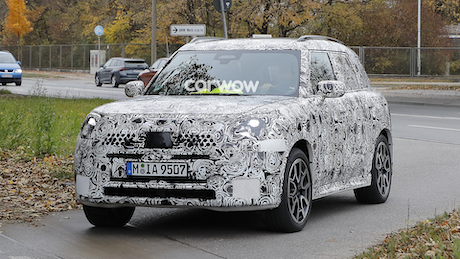 The new Mini Countryman has been spotted testing out on public roads. It’s going to be based on the new BMW X1 and is expected to go on sale in 2023.

A heavily camouflaged prototype of the new Mini Countryman has been caught testing, and there are rumours that an all-electric version is on the cards as well.

This alternative to the Volvo XC40 and Mercedes GLA is expected to go on sale at some point in 2023.

This early prototype of the new Mini Countryman is very well disguised, so it’s difficult to see how its design will differ from the current car’s.

It is expected going to grow in size compared to today’s MINI Countryman by 20cm in length, however. This will offer more passenger and luggage space inside.

Around the front, you can see the headlights are slightly smaller than before but the camouflage prevents you from seeing much more.

The new Countryman does retain the current car’s boxy shape. The prototype spotted here also appears to have a sporty bodykit and quad tailpipes, suggesting this is the ‘Cooper S’ version.

No images have come out of the new Mini Countryman’s interior, but you can expect it to be an evolution of the current car’s cabin.

The large circular infotainment centre on the dashboard has been a staple of the Mini for decades, so expect this design feature to make an appearance on the new Countryman.

It’s also safe to assume that the new Mini Countryman will use a customised version of BMW’s i-Drive infotainment system.

The new Mini Countryman will share its engines with the new BMW X1, so expect to see a range of petrol and diesel options offered.

There are rumours that Mini is planning to drop the plug-in hybrid version of the Countryman and introduce an all-electric version instead. More information on that car should follow in due course.

The new Mini Countryman is still in the early stages of development, so prices won’t be announced for a while. You can expect to see a price rise over the current car though, possibly closer to £30,000.

Keep an eye out for the official reveal towards the end of 2022, with the Countryman expected to go on sale in 2023.

Can’t wait for this new car to go on sale? Check out the latest Mini Countryman deals or compare the best new SUVs on sale right now.