News Mercedes GLE vs M-Class – side by side comparison

Mercedes GLE vs M-Class – side by side comparison 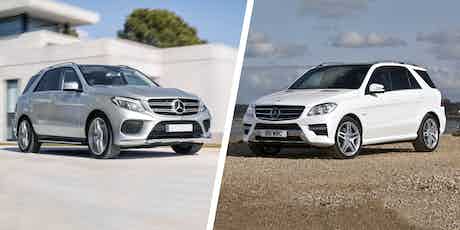 It has a new name, but what else has changed? We take a look at how the new Mercedes GLE differs from the outgoing M-Class

Mercedes has released official images of the new GLE. The large SUV is due to arrive in the UK in September 2015, and will take on the likes of the BMW X5 and revised Audi Q7. We’ve already seen details for the upcoming GLE Coupe which rivals the BMW X6 and the crazed AMG performance version. Take a look at what happened when we accidentally dropped the GLE Coupe into a vat of photoshop and created the next star of the upcoming Jurassic World movie. The regular GLE replaces the M-Class and takes on its new name to fall in line with Mercedes’ renaming strategy. But what’s new exactly? We take a look at the pair side-by-side.

Although the GLE name debuts for the first time, the GLE is more of a thorough revision of the M-Class than a completely new car. At the front, the GLE gains a slightly fresher Mercedes ‘face’, with new C-Class-inspired headlamp units with now incorporate the LED daytime running lights, which were previously located on the bumper. The grille has received minor detail tweaks – including a larger badge and two horizontal slats in place of the previous three – while the front bumper and bonnet have been cleaned up, too. At the sides, apart from some subtly revised alloy wheel designs, everything remains much the same as before. The rear features subtly revised light clusters and a re-profiled bumper.

As with the outside, owners of the M-Class will find the GLE immediately familiar. The biggest change is the inclusion of a seven-inch multimedia display in the centre of the dash, flanked by slightly more rounded air vents. The rather clunky-looking four-spoke steering wheel has been replaced by a much more attractive three-spoke item which, on sporty models, has a flat bottom. Four new shades of beige and brown interior trims offer the option of some class, as do the various types of wood trim finishes. For the performance minded, the wood can be replaced with carbon-fibre trim, too.

The M-Class was formerly offered with three engine options in the UK, and these all remain, albeit with tweaks to increase either fuel economy or performance. As before, the entry-level GLE 250 d produces 204hp from its 2.0-litre turbodiesel unit, but economy has improved by 3.2mpg to 49.5mpg. CO2 emissions have dropped to 140g/km, so road tax will only cost £130 a year. The larger V6 diesel also remains at the same power, but now returns a claimed 44.1mpg instead of 39.2. At the top of the range, the twin-turbo 5.5-litre petrol V8-powered Mercedes-AMG GLE 63 remains, only in a more bonkers form than before. Power has increased from 525hp to 585hp, which helps knock the 0-62mph time down to a frankly offensive 4.2 seconds. Somehow, fuel economy remains the same as before. Perhaps most interesting is the introduction of a new plug-in hybrid variant. The GLE 500 e 4MATIC pairs a 3.0-litre, twin-turbo V6 with an electric motor, and officially emits just 78g/km of carbon dioxide – this despite producing 333hp. It’s ideal for those driving around town or on a short daily commute because the 500 e can run on electric power alone for up to 20 miles, and using a dedicated charging box will replenish the batteries in about two hours.

Prices have yet to be officially confirmed for the new line-up. M-Class prices ranged from £48,190 for the 250 diesel up to just shy of £87,000 for the AMG – we expect the new GLE to roughly stick to these prices.

GLEeful about the new Mercedes?

We’re quite excited about it, too! Check out our review of the current M-Class and the cars the new GLE will need to beat – the Audi Q7 and the BMW X5.