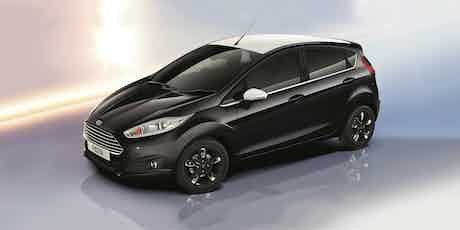 Ford has reinvigorated its best-selling Fiesta supermini with a pair of new special edition models. The Zetec Black and White Editions gain cosmetic changes inside and out to help them stand out from the rest of the range.

The new models follow a similar principle to the Fiesta Zetec S Red and Black editions, but feature a more insurance-friendly engine lineup.

As the names suggest, the Black and White Editions are available in a choice of two colours. Panther Black and Frozen White are offered elsewhere in the Fiesta range, but stand out here thanks to roofs and door mirrors finished in the opposing shade. Further changes include a set of 15-inch alloy wheels with white touches at the tip of each spoke, and rear tinted glass.

The cabin’s been subjected to several subtle alterations. The leather gear knob and steering wheel are both finished with white stitching, while the door handles also gain contrasting white inserts.

Equipment levels are largely similar to the regular Fiesta Zetec, though power folding door mirrors with puddle lights – usually available only as part of the £300 City Pack – are equipped as standard. The new models can be chosen in both three- and five-door bodystyles.

Two petrol engines are available – an 81hp 1.25-litre unit returning a claimed 54.3mpg, and a 99hp ‘EcoBoost‘ – a 1.0-litre turbocharged three-cylinder that achieves 65.7mpg on average.

The Fiesta Zetec Black and White editions equipped with the 1.25-litre engine cost from £13,645 – £550 more than the regular Fiesta Zetec, but that’s covered by the extra standard equipment. Both models are on sale now.