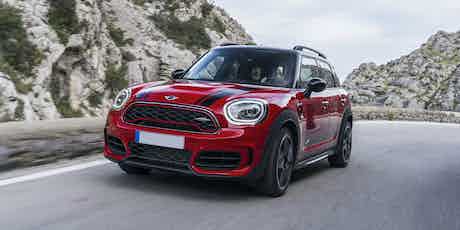 Mini’s released full details on the new £30,675 John Cooper Works (JCW) Countryman. This high-riding SUV is fitted with a 231hp 2.0-litre turbo petrol engine that’ll help it reach 62mph from rest in as little as 6.5 seconds.

Mini’s replaced the standard Countryman’s cluttered front bumper with a simpler, more aggressive affair for the new John Cooper Works model. The two round foglights have been dropped and the silver skidplate replaced by a contrasting black moulding.

At the rear, the Countryman’s bold brakelights have been carried over but its bulky black rear bumper now sports a colour-coded finished. The JCW model also features a large black diffuser in place of the standard car’s chunky silver trim.

Two heavily bolstered seats take pride of place in the Countryman’s cabin while a revised steering wheel, gear lever and grey roof lining help it feel a little more sporty inside than the standard car. This rapid JCW model comes with the same optional rear picnic bench and powered bootlid as the current Countryman and its 450-litre boot is just as roomy.

The Countryman JCW is offered with only one engine, a 231hp turbo petrol that’ll help it sprint from 0-62mph in 6.5 seconds. Lowered suspension should help it feel a little sharper to drive than the standard car while a four-wheel-drive system – fitted to all models as standard – will maximise grip on slippery surfaces. Regular models come with a six-speed manual gearbox while an optional eight-speed automatic is also available.

The Countryman JCW is priced from £30,675 for a manual gearbox model. Versions fitted with an automatic will set you back at least £32,275 while numerous optional extras could push the price up further.