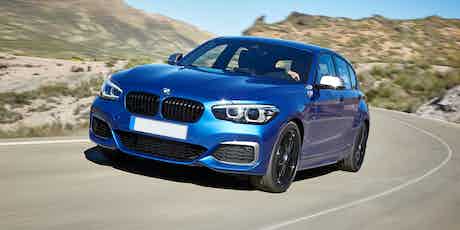 The BMW 1 Series premium small family car has received a mild facelift for 2017 to help it keep pace with the likes of the Mercedes A-Class and new Audi A3. The subtle nips and tucks made by the German brand include new headlights, a pair of new paint options and an upgraded infotainment system.

Inside the 1 Series, the changes are more obvious. The analogue dials are now shrouded in a moody black instrument cluster while revised air vents, chrome detailing and a gloss-black centre console help the facelifted car’s cabin stand out from the outgoing model. Bluetooth connectivity and a USB port are now fitted as standard, too.

The 1 Series’ upgraded infotainment system features the firm’s latest iDrive software and can be fitted with an 8.8-inch touchscreen display courtesy of the Professional Navigation System option. This high-tech system brings with it voice control features and a touchpad on the iDrive’s rotary dial to make entering postcodes as easy as possible.

Apple CarPlay connectivity is also offered alongside wireless smartphone charging and a WiFi hotspot for as many as ten devices.

BMW hasn’t announced how much the facelifted 1 Series will cost but its extra equipment and features mean it’ll cost slightly more across the range than the outgoing car. Entry-level models will set you back from more around £22,000 while top-spec cars could cost more than £31,000.