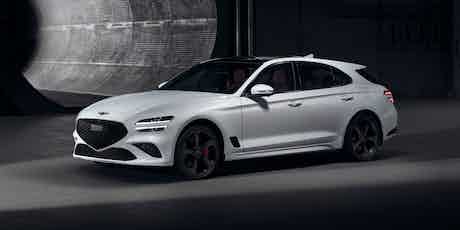 An estate version of the Genesis G70 has been revealed and will play a part in the launch of the brand’s launch in Europe.

This is the Genesis G70 Shooting Brake — the latest car to be revealed by the luxury-focused Hyundai spin-off brand.

It’s the estate version of the G70 saloon and competes with alternatives like the BMW 3 Series Touring and Mercedes C-Class Estate. The G70 Shooting Brake is making its first public appearance at the Goodwood Festival of Speed, and it should go on sale later in summer.

There’s not much change in the design of the Genesis G70 Shooting Brake compared with the saloon. It has the same front end design with split headlights and an almost identical diamond-shaped front grille.

At the back of the Genesis G70 Shooting Brake, you’ll spot the four-way split taillights, with the Shooting Brake getting a higher roofline than the saloon as a result of its estate body shape. It has a pretty swoopy profile for an estate though, taking inspiration from traditional coupe-based shooting brakes.

The interior of the Genesis G70 Shooting Brake mimics the saloon — albeit 40% more boot space. That means leather pretty much everywhere, along with a 10.25-inch infotainment display on top of the dashboard.

No word yet on full options, but you’ll at least have the choice of a rather luscious-looking red leather.

There’s been no word yet on which engines the Genesis G70 Shooting Brake will use, though again it’s likely to match the saloon. This would mean a range of four-cylinder petrol diesel engines, along with the potential for a petrol-powered V6 with as much as 375hp.

Genesis will launch as a brand in Europe and the UK in summer 2021 with the G80 saloon and GV80 SUV.

The G70 Shooting Brake is likely to come at the end of the year (alongside the saloon) and could be priced from around £35,000.

If you’re at the Goodwood Festival of Speed, you’ll be able to catch the G70 Shooting Brake taking to the famous hillclimb.