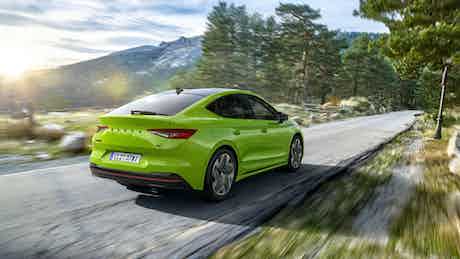 Skoda has revealed pricing for the new Enyaq Coupe vRS ahead of it going on sale in February. Read on for all you need to know.

The Skoda Enyaq Coupe has been revealed along with the sporty Enyaq vRS Coupe. It gets a new rakish roofline, as well as more electric range.

This alternative to the Volkswagen ID5 and Kia EV6 will cost £51,885 for the top-spec vRS model when it goes on sale later in February.

Prices start from £51,885 for the Enyaq Coupe vRS. There’s no word of pricing for the standard Enyaq Coupe but you can expect it to set you back from around £40,000.

The big news with the new Skoda Enyaq Coupe is the low, sloping roofline. This gives it a more sleek side profile than the standard Enyaq, similar to the Volkswagen ID5.

It’s also fairly similar to the Enyaq SUV at the front. You still get angular LED headlights along with the signature illuminated grille as an option, however the coupe does get some deeper front bumpers to make it stand out.

The Skoda Enyaq vRS gets some extra sporty touches, including gloss black trims on the bumpers and a rear diffuser. You also get larger 20-inch alloy wheels as standard.

The interior on the Skoda Enyaq Coupe is identical to the SUVs cabin, meaning it’s nicely finished and looks modern.

As standard you find a 13-inch touchscreen infotainment system with Apple CarPlay and Android Auto, along with a 5.3-inch digital drivers display. You can also add an augmented reality head-up display as an option that can show you upcoming satnav instructions.

The Enyaq vRS’ interior gets some unique touches to differentiate it from the standard car’s. There are some more supportive sports seats with green stitching and piping, as well as carbon fibre trim pieces on the dashboard.

The Skoda Enyaq Coupe is available with one battery size and three power outputs. As standard, in the Enyaq iV 80, you get 201hp from a single motor sending power to the rear wheels.

Step up to the iV 80 X and you get a second motor providing all-wheel-drive, along with 261hp. The range-topping Skoda Enyaq vRS gets 299hp.

The Enyaq Coupe has a maximum of 339 miles of range. This is around 10 miles more than the standard SUV model thanks to its sportier shape that produces less aerodynamic drag. It can also be fast-charged from 10-80% in 30 minutes.

Check out the latest Skoda deals

The new Skoda Enyaq vRS is the first all-electric car to wear the firm’s sporty vRS badge. In order to justify this, it has 299hp and 460Nm of torque, pushing it from 0-60mph in 6.5 seconds. It also gets all-wheel-drive as standard.

The vRS sits lower to the ground than the standard car by 15mm at the front and 10mm at the rear. This, along with the addition of deeper bumpers, side skirts and a rear diffuser, gives the vRS proper presence on the road.

Being the top-of-the-range car, you also get larger 20-inch alloy wheels as standard along with a panoramic roof and the illuminated front grille. The vRS is available in exclusive colours as well, including a very bold shade of ‘Hyper Green’

Can’t wait for the new Skoda Enyaq Coupe? Check out deals on the standard Enyaq SUV, or compare the latest electric cars. Can’t decide which car’s right for you? Tap the button below to get help choosing your ideal model.