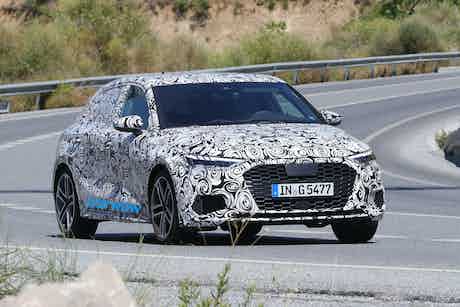 This is your first look at the new Audi S3, pictured somewhere in Southern Europe. Audi’s alternative to the Mercedes-AMG A35 and BMW M135i is expected to be revealed in full later this year.

For now, though, you’ll have to make do with these spy pictures. They show a car that looks significantly fresher than the current model, which has been on sale since 2013. The new car’s pointier nose makes it look more purposeful and below the stretched grille and pretty LED headlights you can see promisingly large air vents chiseled into the S3’s lower bumper.

In profile, the bonnet looks longer than the current model’s, and the new S3 seems to get blistered wheel arches with a body crease that runs from the front to the back wheels. Alloys that look to be around 19 inches in size hide larger discs and calipers. The biggest hint this is an S3 model, though, can be found at the back courtesy of those four chubby exhaust pipes.

Exactly what engine they’ll be attached to remains to be confirmed. It’s rumoured that the new S3 could be a petrol-electric hybrid or a revised version of the 2.0-litre petrol fitted to the current S3. Whatever powers it, you can expect the S3 to have around 325hp, four-wheel drive and a dual-clutch automatic gearbox.

Stay tuned to carwow for more news when we have it.