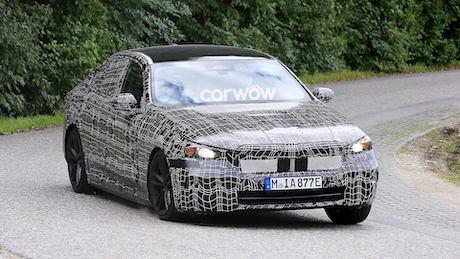 A prototype of the new BMW 5 Series saloon has been spotted testing before it’s officially revealed – possibly as early as 2022. This new saloon will also be available as an electric BMW i5 for the first time. Read on for all you need to know.

A heavily camouflaged prototype of the new BMW i5 has been photographed undergoing testing.

This all-new electric saloon will share plenty of components with the upcoming BMW 5 Series replacement and will be an alternative to the likes of the Mercedes EQE and Tesla Model S.

It seems as though the new BMW 5 series has managed to escape the massive BMW grills, with this test car sporting a more modest front end that looks quite similar to the current 5 series.

The headlights look slimmer than the current 5 Series and they haven’t adopted the split level design spotted on some other BMW prototypes such as the new 7 Series and i7 electric car. These particular lamps could simply be temporary items acting as placeholders for the final design, however.

The vinyl camouflage hides a great deal of detail down the side, but you can make out new flush door handles.

You can’t see much detail around the back either, but the current BMW 5 Series’ sporty, broad silhouette seems to have been carried over.

The new BMW i5 is expected to look very similar to the standard 5 Series, although it may have some exclusive trim options to make it stand out.

New BMW 5 series engines and i5 motors and batteries

The new BMW 5 series will be available with a selection of 4 and 6 cylinder petrol and diesel engines carried over from other cars on the BMW range.

A plug-in hybrid version will also be offered. Power will increase as you go up the range, from around 190hp to 530hp.

No official details have been announced on the motors for the new BMW i5. It’s expected to use the same underpinnings as the BMW iX3 and i4, so may come with similar motor and battery tech, too.

This would mean it could have around 300 miles of range from an 80kWh battery driving a single rear-mounted motor with around 340hp. There may also be a more powerful four-wheel-drive version using the 544hp dual-motor setup from the BMW i4 M50.

No photos have appeared of the new BMW 5 series interior, but it’s safe to assume it will have similar tech to the new BMW i4 and updated 3 series.

This means two large screens spanning half of the dashboard, along with a minimalist design. Being a BMW, you know it will be solidly built with quality materials.

You can expect the new BMW 5 series and i5 to be officially revealed as early as 2022.

Prices haven’t been announced yet, but the new petrol- and diesel-powered cars will almost certainly cost more than today’s entry-level £40,000 BMW 5 Series. The electric i5 will likely set you back more than £60,000.

Can’t wait for this new car to go on sale? Check out the latest BMW 5 Series deals or compare the best saloon cars on sale now.