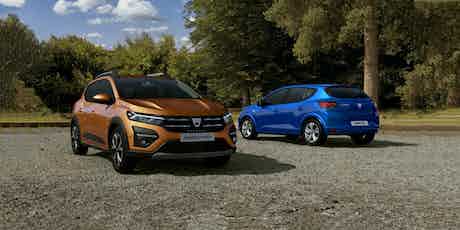 The new Dacia Sandero and Sandero Stepway have been revealed in official pictures before full details on these new affordable cars are released on September 29th.

The all-new Dacia Sandero has been revealed by the budget brand in hatchback and Sandero Stepway crossover models.

The front of the car is much more streamlined than its predecessor and features a Y-shaped light signature that featured LED technology and extends to the front wings. The new car is slightly wider than before too, and this helps it look lower and more purposeful – especially from the front.

The Dacia Sandero Stepway has also been completely overhauled. Now this SUV-inspired hatchback gets a more sculpted bonnet than its hatchback sister car, as well as roof rails, chunky black exterior trim and a chrome Stepway logo under the grille.

No details of the new Dacia Sandero and Sandero Stepway’s engines have been released, but expect a range of conventional petrol and diesel engines; Dacia would be unable to keep the car’s price as low as it is now if it were to fit complex hybrid powertrains.

Despite the lower rooflines, Dacia is unlikely to have compromised on the car’s traditional strength of space, so it’ll likely feel roomy inside, but also a bit cheap in places.

Full details of the Sandero and Sandero Stepway range will be revealed online on September 29, and you can expect both cars to go on sale before the end of 2020. It isn’t certain whether Dacia will offer a similarly basic Sandero model as it did with the outgoing version, so the price of entry-level cars may rise from less than £8,000 to closer to £10,000. Stepway cars will likely cost from around £11,000.

Before these new models go on sale, check out the latest Dacia Sandero deals or read our in-depth Dacia reviews for more information.