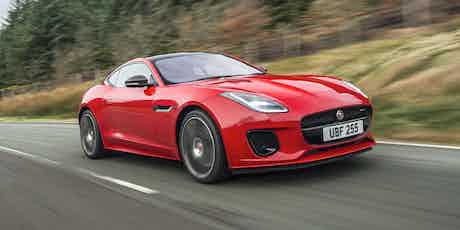 Jaguar has announced it’ll add a new 2.0-litre, four-cylinder engine to the F-Type sports car range to sit below existing V6 and V8 models. This new entry-level version will be offered as both a coupe and a convertible when it goes on sale in spring 2017 priced from £49,900.

From the front, you’d be hard-pressed to tell this new car apart from the existing V6 and V8 models. Its rear bumper has, however, been treated to a new colour-coded rear diffuser and a vast centrally mounted square exhaust pipe.

The engine Jaguar’s fitted to the new F-Type might be no larger than many units fitted to its XE and XF models, but it’s been modified to produce an impressive 296hp – only 39hp less than the F-Type V6. Combine this with the new car’s lighter kerb weight – four-cylinder models weigh 52kg less than a six-cylinder car – and you’ll be able to sprint from 0-62mph in 5.4 seconds, just 0.1 seconds slower than the six-cylinder.

Jaguar’s tweaked the new car’s chassis and suspension to help you make the most of its lighter weight, too – if anything, it should feel a little sharper and more agile than its more powerful siblings. The engine’s intake and exhaust have been tuned to make it sounds as close to the standard six-cylinder model as possible, too – despite the addition of a sound-sapping turbocharger.

Unlike the V6, the new four-cylinder model will only be available with an eight-speed automatic gearbox. It’ll be the first F-Type to come with a host of new driver assistance systems, including autonomous emergency braking, traffic sign recognition, adaptive speed limiter and lane assist, and will reportedly burn through 16 per cent less fuel than a comparable V6 model – thrilling stuff.

The new four-cylinder F-Type will cost from £49,900 when it goes on sale in spring 2017 for an entry-level Coupe model. Convertible versions are expected to cost approximately £5,000 more across the range while well-equipped R-Dynamic models could carry a premium of around £3,000.