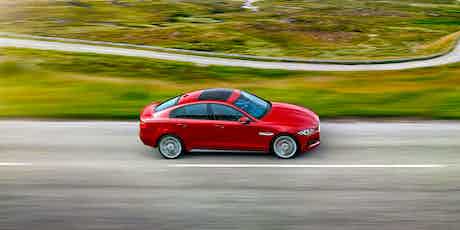 Larger wheelarches, blistered bonnet bulges and vents, and a rear spoiler could set the SVR apart from standard XE models. Additionally, a variety of carbon fibre parts including bumpers, side skirts and mirrors will further differentiate this performance model. Finally, lightweight wheels and massive high-performance brakes will help bring the SVR to an abrupt halt.

The XE SVR’s interior will be similar to the XE S’s, shown, but could add carbon fibre trim pieces

The centre piece of the XE SVR is likely to be its 5.0-litre supercharged engine, borrowed from the Ranger Rover Sport SVR and Jaguar F-Type SVR. We’re expecting it to be slightly detuned from the full-bodied 567hp found in the F-Type SVR down to around 500hp – a hefty number nevertheless.

It’s unlikely a manual gearbox will be available – Jaguar will probably opt to use the eight-speed automatic gearbox normally mated to this 5.0-litre V8. Power will be fed through an all-wheel-drive system, helping the Jaguar cover 0-62mph in potentially less than four seconds.

Sports saloon buyers don’t necessarily buy models with fuel economy in mind, so expect to see the Jag returning around 25mpg – assuming you can drive with the patience of a saint.

Jaguar could launch the XE SVR at the 2017 Geneva Motorshow in March. There’s no official news on when the SVR will go on sale but we suspect late 2017 or early 2018. When it arrives, it could demand a £65,000 price tag, putting it right in line with its closest competitors.