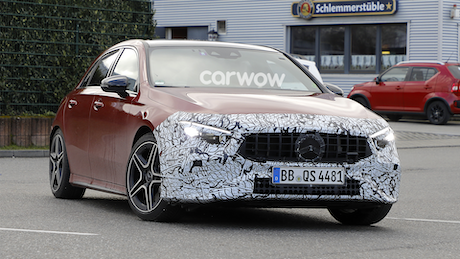 The updated Mercedes A-Class has been spotted testing, along with hot AMG A35 and A45 versions. Read on for all you need to know about this refreshed upmarket hatchback.

The Mercedes A Class is due for an update later this year, and prototypes of the new car have been spotted testing.

Expect this alternative to the BMW 1 Series and Audi A3 to get revised styling, a tweaked interior and updated engines.

These prototypes are wearing very little camouflage, so you can see that the front end remains very similar to the current A-Class. You still get the same pointy headlights, albeit with a new daytime running light design. The lower grille is likely to be tweaked as well.

Looking from the side, you’d be hard pushed to tell this apart from the current car. There are minimal contour lines on the body and the overall design is very clean and crisp.

You can expect to find some updated rear lights under that wrap, as well as a sportier rear bumper.

The A-Class saloon appears to have been given similar treatment as well, with new front and rear bumpers and updated lights all-round.

It looks as though the interior of the new Mercedes A-Class won’t be changing dramatically either, although that’s no bad thing as it’s always been a nice place to sit.

The biggest change you can see is the removal of the central touchpad controller for the infotainment, which means it’ll be getting the latest version of the MBUX system from other Mercedes models.

This means improved voice commands and potentially a larger touchscreen. That tray you can see where the touchpad used to be will more than likely be tidied up for the production car, possibly with some more covered storage.

No announcement has been made yet on the engines for the new Mercedes A Class, but don’t expect there to be any major changes.

This means a selection of 1.3 and 2.0-litre petrol engines, 2.0-litre diesels and the plug-in hybrid A250E. Mild hybrid technology may be added to the petrol and diesel models however for improved efficiency and economy.

The latest versions of the hot Mercedes-AMG A35 and A45 have also been spotted testing, and it seems as though they’re getting a similar subtle makeover to the standard car.

This means you can expect to see the same front and rear lights as the normal A-Class, along with some more aggressive bumpers.

Check out AMG A35 offers

The A35 appears to get the same twin-tailpipes as the current car, whereas the faster A45 is sporting a quad-pipe setup.

The AMG A45 also has wider wheel arches to accommodate some larger alloy wheels.

Expect to see the extended rear wing from the current car feature on the options list as well.

As for engines, while nothing has been announced yet it’s safe to assume that both cars will still be sold with the same 2.0-litre turbocharged unit currently on offer.

As it stands, the Mercedes-AMG A35 produces 306hp, while the AMG A45 S produces 421hp. Both cars also come with all-wheel-drive, which will likely be the same for the new cars as well.

You can expect to see the facelifted Mercedes A-Class revealed later this year, with sales starting shortly after.

There’s no word on pricing yet, however, expect a slight increase over the current car’s £26,195 starting figure. Somewhere around £27,500 would be a safe bet.

Can’t wait for the new Mercedes A-Class? Then check out deals on the current car through carwow. Need to sell your car? Carwow is the place to do it. Get great offers for your car from our trusted dealers all from the comfort of your sofa. Tap the button below to get started.