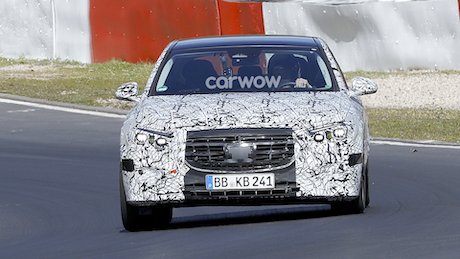 A prototype of the new Mercedes E-Class has been spotted testing ahead of a possible reveal in 2023. Read on for all you need to know about this all-new upmarket saloon.

The new Mercedes E-Class has been spotted on the Nurburgring for testing. This prototype is wearing a relatively thin disguise and will likely be available with plug-in hybrid engines.

This alternative ot the BMW 5 Series and Audi A6 is expected to debut in 2023.

This new Mercedes E-Class pretty exposed considering it’s an early prototype, and you can clearly see the influence from the larger Mercedes S-Class.

Up front, you can see the slim LED headlights which closely resemble those found on the S-Class. There’s also a similar wide grille to that car, too.

Looking down the side, you can see it retains a similar profile to the current E-Class. The new car will also get the same flush-fitting door handles found on other models such as the Mercedes EQS and S-Class.

The back of the car is the most well covered part, however it looks as though the new car will get some LED rear lights and a slightly sportier bumper than the current E-Class.

No images have surfaced of the new Mercedes E-Class’ interior, but you can expect it to echo that of the S-Class.

This will likely mean a large new screen angled on the dashboard and a more minimalist design.

Mercedes hasn’t announced any engines for the new E-Class yet, but it’s a safe bet that there will be a selection of petrol and diesel models available, with high-performance AMG versions coming later on.

It’s highly likely that there will be a plug-in hybrid as well, but not an all-electric model. For that, you’ll want to check out the new Mercedes EQE.

With the new Mercedes E-Class still in the early stages of development, no pricing has been announced yet. It’s safe to say that it will be more than the current car, probably around the £45,000 mark.

Mercedes only recently updated the current E-Class, so don’t expect to see this new one revealed until around 2023.

Can’t wait for this new car to go on sale? Check out the latest Mercedes E-Class deals available through carwow now, or compare the best saloon cars on sale.