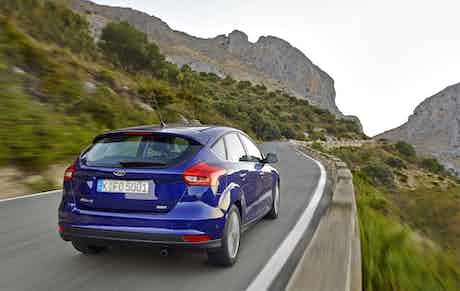 There’ll be a new version of the Ford Focus in UK dealerships from November 2014 and we’re looking at what you’ll be buying in droves.

It should look pretty familiar – it’s the back end of the new version of Britain’s second best-selling car, the Ford Focus. A little mid-life tickle will be visited upon the car, heading to showrooms this November.

Well… not a lot really. There’s an update to the front end to bring the Focus into line with the current Fiesta and the impending Mondeo, but physically it’s the same Focus we’ve been buying by the bucketload for the last few years.

There’s an interior update too and a whole host of new technologies to assist your day-to-day life. The usual set of autonomous parking technologies has been joined by systems that will drive you out of tight spaces too – and a warning device that lets you know of approaching objects as you reverse out of otherwise blind spots. Tack on automatic collision avoidance braking, adaptive headlights and a new system designed to predict and then prevent skids and you have one of the safest family cars money can buy.

There’s a few changes to the engine range but it’s more or less what you’d expect. Efficiency has improved across the board and there’s new 1.5 litre versions of both the EcoBoost petrol engine and the TDCi diesel.

Fans of the 1.6 diesel and 1.6 variable valve timing petrol will be pleased to hear they’ll still be available, and there’s a wide selection of engines available with a six-speed manual or six-speed “Powershift” automatic.

The same as it does now! The new Focus range starts at the same £13,995 as the current one, and prices are broadly similar at every point across the range. Some of the higher specification Titanium and Titanium X models are actually £100 cheaper than they are at present.

The Focus will be the debut of Ford’s new SYNC2 infotainment system, which comes with an 8 inch touchscreen and also voice commands. Bearing in mind that voice controls have been almost universally terrible across the years, we’re looking forward to see how Ford has tackled the concept!

There’s also a master/slave key arrangement as seen on the Fiesta. This allows you to set certain parameters, such as maximum speed or stereo volume, with the master key and prevent anyone who borrows the car with the slave key from exceeding these presets. Any parents reading this will instantly see a use…

This particular segment is one of the most competitive and though the Focus accounts for nearly a third of all European sales, there’s a fair few rivals.

While the Vauxhall Astra is a traditional sparring partner, the Focus is more positioned to take on the Volkswagen Golf these days – and by extension the SEAT Leon, as a slightly more budget conscious and better-looking Golf. Fans of driving dynamics might take a look at the French offerings – Renault’s Megane and the Peugeot 308 – while Japanese manufacturers put in a strong showing too, in the shape of the Honda Civic and Mazda 3. Don’t discount the new Nissan Pulsar either.

Update brings the Focus right into line with tech-savvy rivals.