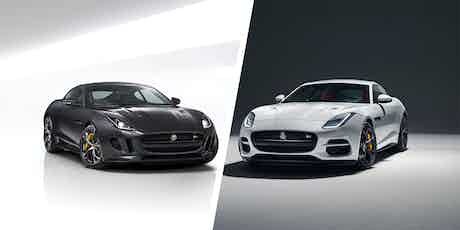 Jaguar has improved the looks of the gorgeous F-Type (yes, really!) and boosted kit for 2017. Find out what’s changed with our dedicated old vs new guide…

Jaguar’s decided its handsome F-Type sports car could do with a discrete nip and tuck for 2017. In addition to a number of visual tweaks, the latest incarnation of this jaw-dropping GT features upgraded tech and a revised model range.

The old car’s rounded grille has been carried over to the new model but the air intakes to either side have been remodelled to feature new horizontal bars and a cleaner, simpler design. The headlights feature full LED technology for 2017, too, helping to give the facelifted F-Type a more modern appearance, not to mention improved visibility at night.

The high-performance SVR model, shown above, hasn’t received any visual tweaks – from the outside it looks identical to the outgoing car. New 400 Sport versions, however, will come with an exclusive black splitter that’ll not be offered on other F-Types.

Not only has the new car’s body been put under the knife, but its cabin has received a thorough seeing-to as well. The sporty seats are now 8kg lighter than those in the outgoing model and a hearty helping of new trim pieces are offered in a wide range of finishes. Chrome, aluminium and carbon fibre can all be lavishly applied depending on your personal preferences.

The old F-Type’s infotainment system was far from class-leading but a comprehensive update for 2017 should help it keep pace with the competition. The eight-inch touchscreen display will feature a revised smartphone-style interface with access to real-time weather and traffic updates. A new park assist feature will also be available to help you slip into tight spots without kerbing your new car’s expensive alloys.

The F-Type S will be dropped from Jaguar’s lineup for 2017 – replaced by an R-Dynamic variant offering the same pair of supercharged 335hp and 375hp V6 engines. Both models will be available with manual or automatic gearboxes and with either rear- or four-wheel drive.

New for 2017 is the limited edition 400 Sport version. This aggressive looking mid-range model will feature a tweaked supercharged V6 engine producing a tempting 395hp. Buyers will be offered both a four-wheel drive model – for sure-footed sprints in slippery conditions – and a lairy rear-wheel drive version. Choose the latter if you prefer to spend your weekends turning tyres into smoke at your local race track.

This automatic-only offering will come with a number of exclusive features including bigger brakes, three new paint finishes, yellow contrast stitching and a system that’ll allow you to tweak individual gearbox, engine, steering and suspension settings.

Entry-level £51,540 V6 models will cost almost exactly the same as the outgoing £51,775 car. The cheapest R-Dynamic model will set you back at least £55,150 while the exclusive 400 Sport version comes with a hefty £70,115 price tag. If that wasn’t eye-watering enough, a super fast F-Type SVR will happily relieve you of around £110,000 quicker than the short time it takes to sprint from 0-62mph.