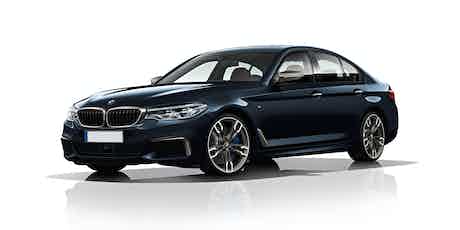 The new BMW 5 Series M550d features a 3.0-litre six-cylinder engine boosted by four turbos and will sprint from 0-62mph in just 4.4 seconds

BMW’s announced its new M550d – a high-performance diesel model with a 3.0-litre engine that’ll accelerate from 0-62mph in just 4.4 seconds. BMW claims this new 400hp version of its latest 5 Series will be the world’s most powerful six-cylinder diesel-powered car when it goes on sale in early 2018 – and it’s going to go on sale in the UK.

The biggest news for the new M550d is the addition of a fourth turbocharger over the old car’s triple-turbo setup. As a result, the new model will produce 400hp and will, thanks to its grippy xDrive all-wheel-drive system and slick eight-speed automatic gearbox, race from 0-62mph in just 4.4 seconds. This upcoming model will, however, be significantly less economical than the 530d – even with a feather-light right foot you’ll struggle to crack 40mpg.

The new M550d will be offered in both saloon and Touring estate guise and will feature a similar plush cabin to the standard 5 Series. Optional sports seats trimmed in leather and Alcantara should be available alongside a standard M-branded steering wheel and the firm’s upgraded iDrive infotainment system with real-time sat-nav updates.

The new M550d will look subtly different to the standard 5 Series thanks to a set of new, more aerodynamic bumpers, lowered suspension, blue-painted brake callipers and twin-exit exhaust tips. A set of grey trim pieces on the wing, grille and mirrors will also come fitted as standard to this high-performance Mercedes E-Class and Audi A6 rival.

The new M550d is expected to go on sale between late 2017 and early 2018. Saloon models could cost from around £55,000 while Touring estate versions could set you back approximately £3,000 more across the range.