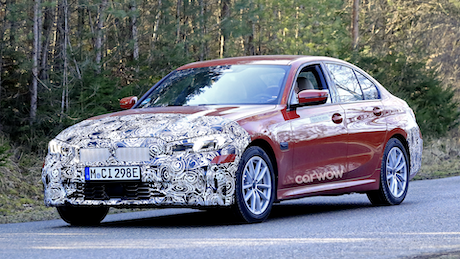 The facelifted BMW 3 series saloon and estate have been spotted testing. Read on for all you need to know about this refreshed executive car.

The updated BMW 3 Series has been spotted testing in both saloon and Touring estate forms, with test cars photographed in body-camouflaging vinyl wraps.

The current BMW 3 Series has been on sale for a few years, though with the launch of the new Mercedes C-Class, it’s likely BMW is getting ready to give its 3 Series a few upgrades of its own.

You shouldn’t expect any huge changes on the exterior of the new BMW 3 Series, but it has been given a few tweaks to keep it looking fresh – handy because Mercedes has just revealed an all-new C-Class.

The good news, or bad news depending on your standing, is that the 3 Series will not come with the huge kidney grilles found on the BMW 4 Series and M3.

Changes up front are limited to a tweaked bumper and some new LED headlights with an updated daytime-running-light design.

Looking at the rear, there’s a fair amount of camouflage hiding any major changes to the BMW 3 Series. It’s a safe bet that there will be an updated bumper with some new rear lights. The sides of the car are completely uncovered, revealing very few changes compared with the current car.

The BMW 3 Series Touring will also receive some updates, most likely a new rear bumper and the same tweaks to the front end as the saloon.

The cabin is likely to get the latest iDrive 8.0 infotainment system as used in the BMW i4 and iX electric cars.

This comprises a 14.9-inch central display and 12.3-inch driver’s display and should keep the 3 Series up to speed with newer offerings such as the latest Mercedes-Benz C-Class.

It’s also safe to assume the new 3 Series will be getting some new interior trim, as well as an updated dashboard design.

A mid-life facelift for any BMW usually means that the engines get updated, and the new 3 Series is likely to follow the same pattern.

Power outputs currently range from 184hp to 374hp – the new car should have a range of similarly powerful engines.

An electric BMW i3 Saloon is likely to arrive at some point, but don’t expect it to come as part of this facelift.

Expect to see an official confirmation of the new BMW 3 Series in the spring of 2022, with sales starting late in the year.

Don’t want to wait for the updated BMW 3 Series? Check out the latest offers on the current car. You can also now sell your car through carwow. It’s quick and easy, and you’ll get a great price for it from one of our trusted dealers.