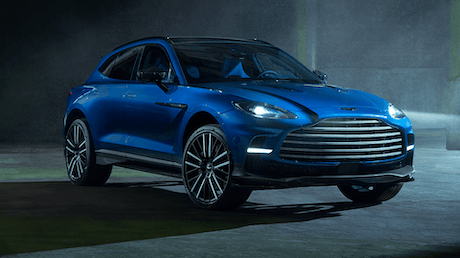 Aston’s DBX SUV gets a power boost and chassis upgrades focused on performance. Read on for full details.

This is the Aston Martin DBX 707 — an upgraded version of the British luxury manufacturer’s SUV.

A boost in power sees this become the most powerful SUV on sale, with chassis tweaks made to further compete with the Mercedes-AMG GLS 63, Bentley Bentayga Speed and Lamborghini Urus.

The Aston Martin DBX 707 looks more aggressive compared with the standard car thanks to some new design tweaks.

A redesigned grille takes centre stage, said to be the largest ever fitted to an Aston Martin, and now comes with double-stacked slats. There’s also a lower and longer front splitter.

You may have noticed the ringed-daytime running lights have been swapped out for (arguably less cool) flat units, too.

Lower side skirts have been fitted along with more satin chrome trim around the windows. There’s also a set of huge 23-inch alloy wheels – the largest you can get on the standard DBX measure ‘just’ 22 inches across.

There’s a new spoiler at the back and a larger rear diffuser, plus a quad-exit exhaust system without any fakery. A vast improvement over the standard car’s exaggerated pair.

That’s still sent to all four wheels, though a nine-speed automatic wet-clutch gearbox has been fitted in place of a torque converter unit. This allows for quicker gear changes, along with a new launch control mode.

Tweaks have been made to the suspension for a more engaging drive. It doesn’t sit any closer to the ground than the regular DBX, but it does come with  a beefed-up electronic limited-slip diff at the rear axle.

Carbon-ceramic brakes are now standard-fit too, with upgrades to the system resulting in a total reduction of 40.5kg in unsprung mass. That translates to better handling.

Changes to the Aston Martin DBX 707’s interior are pretty comprehensive, too. A new centre console has been fitted, along with new dedicated buttons for suspension and gearbox modes.

There’s an active exhaust button as well now so you can hear the full grunt of the V8. Oh, and soft-close doors so you and your passengers don’t inadvertently slam them shut.

Sports seats now come as standard, though comfort-oriented ones are a no-cost option, with 16-way electric adjustment for no extra cost. The interior is upholstered in leather ad Alcantara as standard.

Deliveries of the Aston Martin DBX 707 will begin in mid-2022, though Aston Martin hasn’t revealed prices just yet.

Expect it to cost a fair chunk more than the standard car’s £160,000ish asking price though.

Looking for a new SUV? Compare the latest deals available through carwow