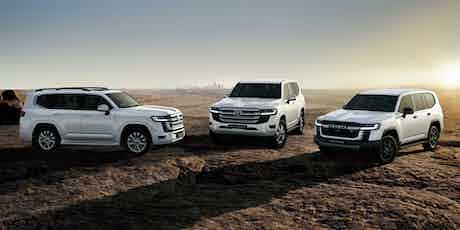 This is the new Toyota Land Cruiser 300, which ditches the old car’s V8 in favour of two new V6 engines. It also comes with loads of new tech and a revised design. Read on for more details.

The new Toyota Land Cruiser 300 is the latest incarnation of Toyota’s ultimate off-roader. This all-new alternative to the likes of the Land Rover Defender and Mercedes G-Class comes with new engines, new tech and a new look for 2022.

The new Toyota Land Cruiser looks really similar to the old 200 Series model. It’s just as boxy and has similar square headlights, but the new car does have an even taller grille, some new contrasting trim and a remodeled rear end.

Both new engines come with an equally box-fresh 10-speed automatic gearbox, in place of the old car’s 8-speed unit.

The latest Land Cruiser 300 comes with a separate body and chassis – just like the Jeep Wrangler and Mercedes G-Class, and unlike the Land Rover Defender.

You also get four-wheel drive and various locking differentials as standard, but there’s a new electronically controlled adaptive suspension system. This adjusts the damper settings and can even disconnect the anti-roll bars to give you maximum traction on uneven surfaces.

Toyota’s also added a system called the ‘Multi Terrain Select’, which will automatically detect what surface you’re driving on and set the car up for you.

Finally, there’s the ‘Multi-Terrain Monitor’ that works in a similar way to the ‘Clear-sight Ground View’ system in a Land Rover Defender, and shows you a view through the car’s bonnet on the infotainment system.

Toyota has given the new Land Cruiser’s interior a thorough makeover. The old car looked like it was stuck in the early 2000s, but the new model is far more high-tech.

You can get the new Land Cruiser with 5 or 7 seats – just like the old model. And, because the new car is almost exactly the same size, it’ll be just as roomy inside, too.

Toyota has also revealed a GR Sport version of the new Land Cruiser. Yes, GR as in ‘Gazoo Racing’ – the people who built the awesome Yaris GRMN and the epic GR Yaris.

But don’t get too excited. This new Land Cruiser isn’t some rally-spec homologation special… It’s more like a visual upgrade pack. A bit like Audi’s S Line or Mercedes’ AMG Line.

This means you get some different alloy wheels and new black bumpers that should hide any scratches you get while off-roading.

Don’t think about putting your name down for a new Land Cruiser 300 if you live in the UK or Europe, because it won’t go on sale here.

It will go on sale in the Middle East and Russia though, sometime in Summer 2021. And, it’ll probably set you back the equivalent of around £70,000.

Check out the latest Toyota deals available through carwow or compare the top 10 best 4x4s on sale now.