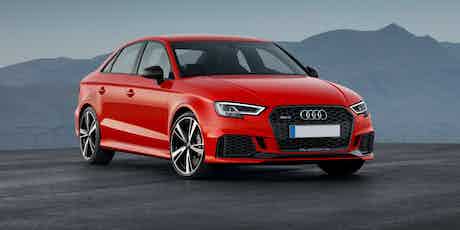 Audi has revealed the latest addition to its high-performance lineup, the RS3 Saloon. Read on for photos and full photos…

Audi has released details of its new RS3 Saloon at the 2016 Paris Motor Show. This new model takes the A3 Saloon’s body and adds an aggressive new look and a raft of mechanical upgrades to help it compete with the likes of the Mercedes-AMG CLA 45.

Not only will this new car be the first A3 Saloon to wear an RS badge, but it’s the first model in the facelifted A3 range to be fitted with the upgraded 400hp version of the TTRS’ 2.5-litre five-cylinder engine. Read on for full details…

The RS3 Saloon looks just as aggressive as the outgoing RS3 Sportback thanks to its pair of angular headlights, numerous gaping air intakes and swollen wheelarches. The bootlid has been fitted with a subtle spoiler, too, while the rear bumper features a contrasting black diffuser above two large oval exhaust tips.

All RS3 Saloons come with LED headlights as standard but drivers after an even clearer view of the road ahead can specify optional matrix LED units that can blank out part of their beams to avoid dazzling oncoming cars.

The interior has been given a racy makeover, too. Its flat-bottomed steering wheel comes with a tell-tale RS badge while contrasting stitching and bright red air vent surrounds help make sure your passengers don’t mistake this for a standard A3 Saloon.

This is also the first high-performance A3 to be fitted with the latest version of the TTRS’ 2.5-litre turbocharged petrol engine. This lightweight five-cylinder unit produces 400hp – enough to blast the new range-topping saloon to 62mph from rest in just 4.1 seconds and on to an electronically limited 174mph top speed.

This engine will drive the wheels through a seven-speed dual clutch automatic gearbox and Audi’s famed quattro four-wheel-drive system. Selectable drive modes allow you to choose between comfort and dynamic settings as well as alter the position of special flaps in the exhaust to amplify or soften the engine’s burbling five-cylinder tone.

Audi’s Virtual Cockpit display will be fitted as standard to all RS3 Saloons, as will a WiFi hotspot and Audi’s Phone Box system – a wireless charger for your smartphone that can also boost its signal using the car’s built-in aerial. A new traffic-jam assist feature is also offered that can steer for you in slow moving traffic – perfect for rush hour.

Audi hasn’t confirmed how much the new RS3 Saloon will cost but, when it goes on sale in 2017, we expect entry-level models to set you back approximately £43,000.