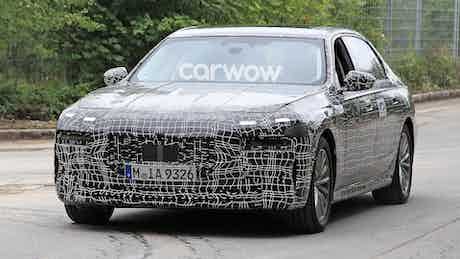 A prototype version of the new BMW 7 Series has been spotted before the finished car is launched in 2022. Read on for all the details on BMW’s upcoming flagship luxury limo.

The current BMW 7 Series is getting on a bit now, and it’ll soon be replaced by a brand-new model. Like its predecessor, the new 7 Series will be BMW’s high-tech flagship car, and is set to come with even more tech than the Audi A8, Lexus LS and the recently launched Mercedes S-Class when it goes on sale in 2022.

As the test car in these spy shots shows, the new BMW 7 Series will share similar design cues with the car it’ll replace. Like the current 7 Series, this latest version will have a love-it-or-hate-it huge front grille, slender rear lights and a strong crease that runs along almost the entire length of the car.

Earlier shots of the prototypes showed the 7 Series with blocky headlights, suggesting change might be afoot but those appear to have been swapped out with the thing style that modern BMWs typically sport.

BMW has confirmed the new 7 Series will come with a variety of petrol and diesel engines – many of which will come with mild-hybrid systems to help save fuel. There’ll also be plug-in hybrid model and a fully electric version, called the i7.

CHeck out the new BM i7

Expect the new BMW 7 Series range to kick off with a couple of 3.0-litre turbo-diesel engines, a 3.0-litre turbocharged petrol, a brawnier 4.4-litre twin-turbo V8 petrol and a petrol-electric plug-in hybrid with more than 40 miles of electric-only range.

It’s likely the less powerful engines will be rear-wheel drive as standard, while the more powerful models will come with four-wheel drive. All cars are expected to come with an eight-speed automatic gearbox, but BMW isn’t expected to build a replacement for the M760 Li V12 model.

The new BMW 7 Series’ interior hasn’t been spotted yet, though you can be sure it’ll be supremely plush and massively spacious inside. If you want even more room to stretch out in, there’ll almost certainly be an extended version, too.

Tech specs will be revealed closer to the car’s launch, though it’s likely the new BMW 7 Series will have equipment on par with the luxurious BMW iX electric SUV. A more minimalist interior dominated by a huge curved digital display on the dashboard is likely, along with built-in 5G data connectivity and standard voice- and gesture-control features.

The new BMW 7 Series isn’t due to arrive in showrooms until 2022, though there’s a possibility the car could be revealed before the tail end of 2021. Prices are set to rise a fair bit over the current car – expect the range to cost from at least £80,000.

Can’t wait for the new 7 Series to go on sale? See the latest BMW 7 Series deals available on the current car or check out the top 10 best luxury cars on sale now.