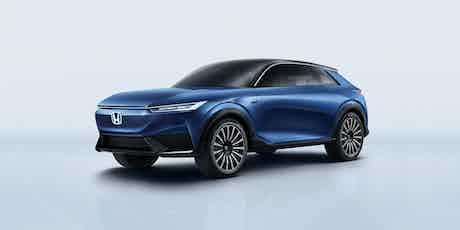 Honda has revealed a new concept car, called the SUV e:concept. It show shows what the brand’s first electric SUV will look like when it goes on sale in 2021.

The new Honda SUV e:concept has been revealed as a part of the 2020 Beijing Motor Show. It shows a new crossover car that “indicates the direction of a future mass-production model,” according to Honda.

There are very few details to go on for now, but Honda did add that the car will feature autonomous and driver safety aides with “improved recognition, predication and decision-making performance”.

This is because it has a 360-degree radar, allowing it to monitor what’s going on all around the car and react accordingly. Honda says it will be able to keep up in more complex situations than current models.

The Honda SUV e:concept will also feature new in-car tech as part of an update to Honda Connect, the firm’s software set-up. The new system will feature over-the-air updates, better smartphone connectivity and some sort of AI assistant (like Siri or Hey Google).

The Honda SUV e:concept is a two-door, which won’t be the case on a production model, because SUVs really need back doors, too, if they’re going to appeal to family buyers. It also features a prominent Honda badge at the front, sleek headlights and a large bonnet, despite the fact that there’s no engine under there.

There are no technical details about the Honda SUV e:concept at all, but it’s a reasonable assumption that it will be similar to Honda’s first EV, the Honda e. This has a 35.5kWh battery and a 136hp electric motor, although a bigger, heavier SUV might need more battery capacity to match the e’s range of 137 miles.

Honda has also announced a Chinese-market CR-V plug-in hybrid, based heavily on the existing CR-V Hybrid but with the ability to plug in and charge at home.

Neither model has been confirmed for the UK yet but expect to see more information about both in 2021.

Check out the Honda deals available through carwow or compare the latest offers on the best electric cars on sale.