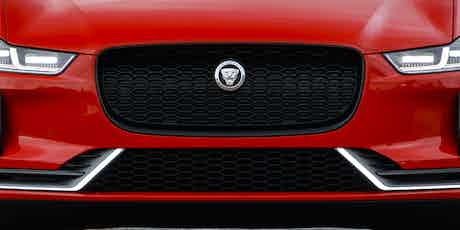 Jaguar will add a new J-Pace model to its SUV range in 2021 as an alternative to the likes of the Porsche Cayenne, Audi Q8 and BMW X7

Jaguar has trademarked the J-Pace name for an upcoming SUV model. This all-new car will be significantly larger than the existing F-Pace to make it an alternative to the likes of the Porsche Cayenne and upcoming Audi Q8.

The new J-Pace will draw inspiration from the current range of Jaguar SUVs, including the all-new electric I-Pace, shown above. Some angular headlights and a high-mounted broad grille should help it look just as sporty as the Cayenne but less aggressive than the Audi Q8.

Also borrowed from the I-Pace should be some contrasting panels attached to the bumpers and sills. These’ll make the new car look as low-slung as possible – for a high-riding SUV, at least. Unlike other Jaguar SUVs, the J-Pace should come with a relatively flat roofline (like the Range Rover) to help maximise rear-seat headroom and bootspace.

When the J-Pace is revealed, the cabin should have plenty in common with the new I-Pace. Three vast screens will dominate the centre console and dashboard, through which you’ll control everything from the heated seat settings to the satellite navigation. Hopefully, by the time the J-Pace goes on sale, this setup will have been tweaked to make it easier to use on the move than in the I-Pace.

Elsewhere in the cabin, you’ll find loads of plush materials, some supportive seats and more head and legroom than in any current Jaguar SUV model. The J-Pace’s large size means it’ll be better for carrying three adults in the back than the F-Pace and it’ll have a bigger boot, too.

No official details have been released, but the J-Pace could come with the option of an extended wheelbase. This’ll make it even more spacious in the back than the standard car, and may even come with two super-luxurious seats in the back instead of a conventional three-abreast layout.

Under the J-Pace’s bonnet will sit a selection of petrol and diesel engines like those offered in the F-Pace, shown above. You’ll also be able to get it with a plug-in hybrid system, borrowed from the Range Rover Sport PHEV. The most affordable models may be available with a four-cylinder petrol engine, while faster versions will get V6 units. A 3.0-litre V6 diesel with around 300hp will be your best bet if you do lots of motorway journeys, while a supercharged V6 petrol will be the car to get if you’re after something sportier.

Jaguar may also launch a seriously fast SVR model using a supercharged V8 petrol engine from the F-Type sports car. This’ll produce at least 550hp and should help the J-Pace SVR blast from 0-62mph in less than five seconds. All J-Paces will come with an automatic gearbox and four-wheel drive as standard, so they’ll be more than capable of tackling a muddy field should you ever decide to venture off-road.

Jaguar will probably tease a concept version of the upcoming J-Pace at a motor show before 2020, but the finished car isn’t expected to go on sale until 2021. When it does, get ready to hand over at least £80,000 to park an entry-level model on your driveway.