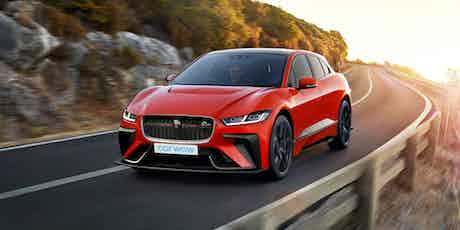 Jaguar has confirmed it’s working on a hot version of its all-electric SUV, the I-Pace. Here is an exclusive render of what this car – a potential Tesla Model S alternative – could look like…

Jaguar has confirmed that an eventual decision to make a performance electric car is a matter of “when, not if.” Above is what the car – expected to be called the Jaguar I-Pace SVR – could look like.

This carwow render is inspired by the Jaguar I-Pace eTrophy, a stripped-down I-Pace race car. So, you can expect the Jaguar I-Pace SVR to have a more aggressive front splitter than the standard model. It juts out beneath air intakes at each corner of the front end, both of which are far bigger than what you’d find on the regular I-Pace. These air intakes are each cut in half diagonally – sending air to the I-Pace’s front electric motor and its brakes.

The ‘grille’ at the front of the I-Pace SVR is clearly filled in – much like on the eTrophy and standard model’s – but has been given a special ‘SVR’ decal, the same as what you’d find at the front of an F-Pace SVR.

At the side, you can find more air vents above the wheels, giving the I-Pace SVR some cool, shark-like ‘gills’, which help reduce lift. Plus, you can’t overlook the huge vent on top of the bonnet, which is a signature of the I-Pace range.

Finally, around the back, the big spoiler that you’d find on the I-Pace eTrophy has been removed, giving it a more public-road-friendly look.

Currently, the Jaguar I-Pace has two motors (one for each axle) that combine to give the car four-wheel drive, 400hp and a 0-60mph time of 4.5 seconds – quick, but not quick enough to beat a Tesla Model S P100D. As a result, to get anywhere near the Tesla’s 2.4-second 0-60mph acceleration time, you can expect the SVR’s two electric motors to produce at least 600hp combined.

Perhaps more importantly, you can also expect the SVR to be a barrel of laughs in bends. Its sophisticated four-wheel-drive system should serve up lots of grip or, depending on which drive mode you’re in, smokey tails slides that are easy to control.

A range of around 300 miles, meanwhile, would make the SVR a performance EV that you can use for long trips.

What do you think of carwow’s newest render? And do you reckon the I-Pace SVR will be able to stand toe-to-toe with the Model S? Let us know in the comments below!

Bookmark the carwow news page to stay up to date on all the newest and most exciting car models.