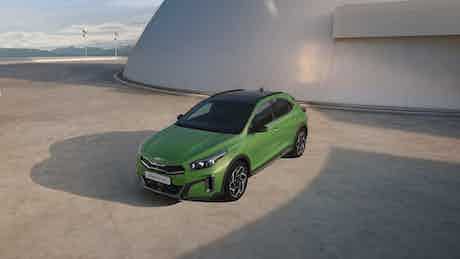 The new Kia XCeed has been revealed, with new trim levels and updated styling. Read on for all you need to know.

The updated Kia XCeed has been revealed and it features more aggressive styling, some new engine options and an overhauled selection of trims for you to choose from.

This alternative to the Volkswagen Taigo and Ford Puma will go on sale next year.

Changes to the new Kia XCeed are pretty subtle, in fact you may need to put your specs on if you’re going to spot them.

Up front, this new car gets an updated ‘Tiger Nose’ grille, in line with other models in the Kia range. The bumper has also been tweaked slightly with a more aggressive design and the headlamps are more swept back – more like a set of wraparound shades than Tom Cruise’s Ray Bans.

A GT-Line version of the XCeed is available for the first time as well, adding more sporty titbits (such as a different rear bumper design) and 18-inch alloy wheels. You’ll also spot some honeycomb effect lights, similar to those found on the Kia Ceed hatchback.

Comparing the outgoing Kia XCeed’s cabin with the new one is a bit like a tricky game of spot the difference, but there are some key changes.

You get a sporty new steering wheel, featuring Kia’s new logo in the centre, as well as a new digital driver’s display. A 10.25-inch touchscreen features on the dashboard and comes with Apple CarPlay and Android Auto smartphone mirroring.

Go for the new GT-Line model, and you get a flat-bottomed steering wheel and perforated leather on the gearknob.

The new Kia XCeed will be available with a range of petrol, diesel, and plug-in hybrid engines. The most exciting new addition is a 1.6-litre turbocharged petrol engine with 204hp. It won’t feel as sporty as a Ford Puma ST, but it should be pretty nippy for a practical family runabout.

If you’re feeling less frisky and more sensible, then you can go for either the 1.0-litre three-cylinder, or 1.5-litre four-cylinder engine with 120hp and 160hp respectively.

Compare the best hatchbacks on carwow

For a taste of what this car will be like to drive, watch Mat’s review of the Kia Ceed below…

Not sensible enough for you? Then you’ll want the 1.6-litre diesel mild hybrid with 136hp. A plug-in hybrid is also available for those looking to lower their company car tax bill.

This model has a 1.6-litre engine paired to an electric motor and will do around 30 miles on electric power alone. Perfect for those who want a taste of EV life but aren’t ready to fully commit just yet.

The new Kia XCeed is due to go on sale at the end of the year, with deliveries starting around December 2022.

As for price, Kia hasn’t announced an official figure yet, however you can expect it to cost more than the current car. Somewhere around £25,000 is a safe bet.

Can’t wait for this new Kia XCeed? Check out deals on the current car through carwow, or compare offers on the latest SUVs. You can also sell your old car though carwow, and it’s quick and easy. Tap the button below to find out more.