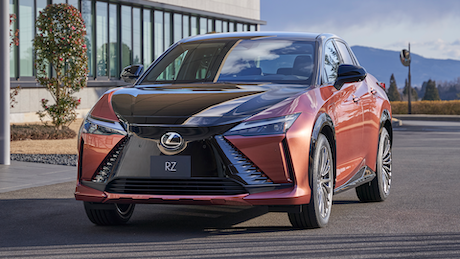 This is the new Lexus RZ. It’s the first purpose-built pure-electric car Lexus has made and comes packed with tech, including an all-new steer-by-wire system. Read on for full details.

This is the brand new Lexus RZ. It’s the first-ever Lexus that’s been designed to be a pure electric car from the ground up, although it actually borrows loads of bits from the new Toyota bZ4X.

It’s an alternative to the likes of the Mercedes EQB, the Audi Q4 e-tron and the BMW iX3 and is set to go on sale later this year.

Big grilles are all the rage at the moment (cough, BMW), but the new Lexus RZ have one at all.

There’s a small intake under the number plate but the rest of the bumper is completely blanked off – a bit like on a Tesla Model Y.

The Lexus RZ looks much more dramatic than that car from the side, though. There’s a strong crease that links the front wheel to the back doors, and a kink under the back windows that could have been inspired by the Lexus LC coupe.

The RZ comes with 18-inch alloy wheels as standard but top-spec cars get 20-inch alloys instead.

The new Lexus RZ is covered in straight edges and pointy corners at the back. The two fins on the roof look similar to those on a Lotus Eletre, but the rest of the RZ looks pretty similar to the facelifted Lexus NX.

Lexus has got rid of as many unnecessary buttons in the RZ’s cabin as possible. As a result, it looks much simpler inside than any other Lexus you can buy right now. This is definitely a good thing.

You can get the Lexus RZ with a brand-new steering yoke instead of a normal wheel – just like on a Tesla Model S.

It’s supposed to give you a better view of the instruments and the road ahead than a normal steering wheel, but the big news is that this new system has no mechanical link between the steering yoke and the front wheels. It’s connected electronically instead.

This means Lexus can make the steering much more sensitive than normal at slow speeds, so you don’t need to spin the rectangular yoke round in circles like a normal wheel.

Thankfully, the all-new 14-inch touchscreen comes across the Lexus RZ range. It gets cloud-based navigation, Apple CarPlay, Android Auto and a ‘Hey Lexus’ voice-activate assistance that should make it easier to use than the fiddly infotainment systems in many current Lexus cars.

You can also get a dimmable panoramic glass roof with a special coating that retains heat in the winter and reflects it in the summer. That way you don’t have to use the air conditioning as much, which helps the car use less electrical energy.

However, the Lexus also comes with a special ‘Range’ mode to help you eke out a few extra miles at the end of a long drive. It switches off the climate control and limits the power you get from the motors to help you reach the nearest charger.

Lexus hasn’t confirmed how quickly you’ll be able to recharge the RZ when you do find a plug. But, it should be the same as the Toyota bZ4X.

That car comes with 150kW fast-charging that can boost the battery from flat to 80% full in about half an hour. Lexus also says that the RZ’s battery should retain around 90% of its total capacity after 10 years.

The Lexus RZ comes with dual motors as standard. There’s a 204hp motor at the front and a 109hp motor at the back that produce a total of 313hp and give the new RZ four-wheel drive. This means the RZ has almost 100hp more than a top-spec four-wheel-drive Toyota bZ4X.

You can already reserve a new Lexus RZ, even though Lexus hasn’t confirmed exactly how much it’ll cost. Entry-level models will probably set you back more than £50,000, and top-spec cars could cost more than £60,000 when the RZ goes on general sale later this year.

Can’t wait for the new Lexus RZ to go on sale? Compare the latest electric car offers or see just how easy it is to change your car with carwow. You can sell your car and get a great deal on a new one, all from our network of trusted dealers and all from the comfort of your own home. Tap the button below to get started.