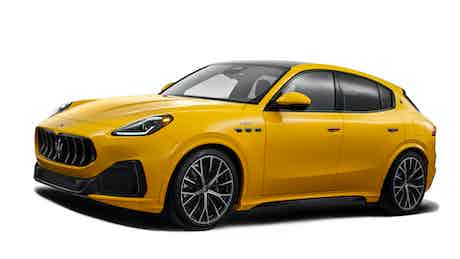 The new Maserati Grecale SUV has been officially revealed before it goes on sale later this year.  Read on for all the details on this new Porsche Macan alternative…

The Maserati Grecale SUV has been revealed, and it’s going on sale later this year. This alternative to the Porsche Macan and Alfa-Romeo Stelvio will be available with a 530hp V6 engine.

It’ll also be the first Maserati model to be made available as an EV. Mild hybrid options will also be available.

The new Maserati Grecale will be available with a wide range of engines, starting with the Modena and the GT models. Both of these get a 2.0-litre four-cylinder petrol engine with mild hybrid technology, and they produce 330hp and 300hp respectively.

Then you have the performance Trofeo model. This uses a tweaked version of the engine from the Maserati MC20. It’s a 3.0-litre twin-turbocharged V6 with 530hp and 620Nm of torque which is good for 0-60mph in 3.8 seconds and a top speed of around 177mph.

That’s 20hp more than you get from an Alfa Romeo Stelvio Quadrifoglio and only 30hp less than you get in a BMW X4M Competition.

There will also be an all-electric version of the Grecale along at a later date called the Folgore.

Not much has been revealed about this model, however it will have a 105kWh battery and 400V charging technology. It’ll also produce as much as 800Nm of torque – that’s significantly more than you get in a Tesla Model Y Performance.

Every petrol Grecale will come with an eight-speed automatic gearbox and four-wheel-drive as standard. A limited-slip differential will also be standard on all but the entry level GT cars. You can pay extra on some models to get adaptive dampers and air suspension as well.

The new Maserati Grecale carries over a lot of styling cues from other cars in the range, such as the three vents on the front wing and Maserati logo behind the rear door.

Up front, you have the traditional Maserati grille design with vertical slats and a large logo in the centre. On the Trofeo performance models you also get aggressive air intakes integrated into the deeper front bumper, while the electric Folgore gets a more blanked-off facia (see below).

Down the side, 19-inch alloy wheels come as standard, however 20 and 21-inch options are available. All Grecale models come with flush-fitting door handles and the sides are pretty fuss-free, with only a few lines to make it seem more muscular. Trofeo models get sporty side skirts and wheel arch extensions.

At the rear, you can differentiate the Trofeo by the quad-tailpipes and rear diffuser. There’s also a subtle boot spoiler and the Maserati logo spelt out across the rear end. The electric Folgore has a more subtle rear end treatment with a smaller diffuser.

The interior of the new Maserati Grecale is a bit of a departure from Maserati models of old, as screens now dominate the cabin.

You get a new 12.3-inch infotainment screen in the centre, paired with an 8.8-inch screen below that for the climate control. You also get a digital drivers display, and even the clock is now a screen. A head-up display is available as an option.

You can have the Grecale with Maserati Connect, which includes live traffic updates, a WiFi hotspot and Amazon Alexa services in the car. You also get Apple CarPlay and Android Auto as standard.

As for the design, it appears to be very clean and classy. There’s plenty of leather and metal trim around the place and the full-width air vent is a cool touch. Trofeo models get additional carbon fibre and perforated leather to accentuate its sporty characteristics

The new Maserati Grecale goes on sale in the second half of 2022, however the electric Grecale Folgore will come a year later in 2023.

Prices haven’t been announced yet, however you can expect it to start at around £50,000, with Trofeo models being closer to £90,000.

Can’t wait for the new Maserati Grecale? Check out deals on SUVs through carwow. If you’re looking to change your car, then carwow is the easiest way to do it. You can sell your old car and get a great deal on a new one from our trusted dealers. Tap the button below to get started.