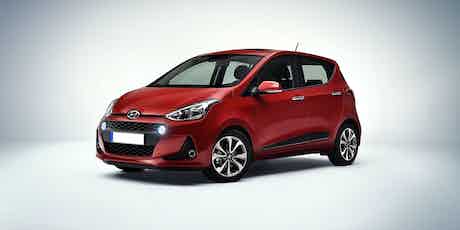 Hyundai has given its compact i10 city car a comprehensive facelift and a raft of new technology to help it compete with rivals such as the Volkswagen Up and Kia Picanto. This new model will be first shown to the public at the upcoming Paris Motor show in October 2016.

Will a new look and extra standard kit make this Korean offering a more tempting prospect than its many German and Japanese rivals? Read on for full details and pictures…

The most obvious change is a heavily revised front bumper fitted with Hyundai’s new signature grille. This ‘cascading’ design features a curved trapezium outline and two compact LED daytime running lights tucked in each upper corner. The headlights appear to have been carried over mostly unchanged but the two air intakes below are significantly more angular than before.

The large black trim pieces fitted to the doors have been left unchanged but the rear bumper now boasts a contrasting black panel and round reflectors in place of the old car’s square units.

In addition to existing black and blue upholstery options, the new i10’s interior will be available with new red trim as standard. A new seven-inch touchscreen infotainment system with sat-nav, Apple CarPlay and Android Auto functionality will be offered on top-spec models. New safety features, including front collision and lane departure warning systems, will be fitted to all i10 models as standard.

The new i10 will be available with the same 1.0 and 1.25-litre petrol engines as the current model. The existing car’s five-speed manual and four-speed automatic gearbox options will be retained, too. Hyundai claims the i10’s ride and handling have been improved thanks to a modified steering rack, however.

We expect Hyundai to announce full prices and an official release date after the car is shown to the public at the Paris Motor Show in October 2016. It will probably cost slightly more than the outgoing model to reflect its additional standard equipment. Entry-level models could cost approximately £9,000 while top-spec versions could set you back closer to £13,500.