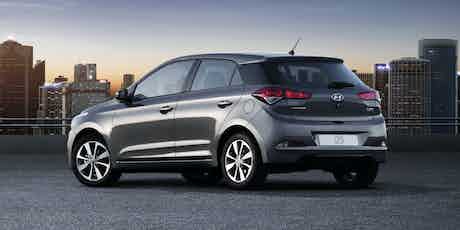 Hyundai is offering a special edition version of its i20 supermini. This Ford Fiesta and Volkswagen Polo rival is dubbed the Turbo Edition and gets some choice equipment upgrades along with the brand’s new 1.0-litre turbocharged petrol engine.

The Turbo Edition is based on the SE meaning it already gets Bluetooth integration, DAB digital radio, cruise control and a leather multi-function steering wheel. In addition, this special model gets a rear-view camera, automatic headlights and satellite navigation.

The built-in sat-nav includes a seven-year subscription to TomTom’s live services that brings up-to-date traffic information, speed camera locations, weather info and can even highlight points of interest around you.

All Turbo Edition models get a black and grey interior, and buyers get a choice of white, blue, silver, grey, black or red exterior paint finishes. Rounding off the look is a set of 16-inch alloy wheels to help the car look purposeful.

Surprisingly, this model is actually cheaper than the SE costing just £12,975 compared to £14,025, making the Turbo Edition a bit of a no-brainer. Combined with the firm’s generous five-year warranty, the i20 Turbo Edition is a very sensible ownership prospect. It’s available to order now and coincides with a new ad campaign from the firm highlighting its rally success.

Under the bonnet and alluded to in the name is Hyundai’s new 1.0-litre, three-cylinder turbocharged petrol engine. It makes 99hp and claims to return 63mpg but the standout feature is its peppy nature that makes it such a great match to this car. It’s more responsive than the equivalent engine in the Ford Fiesta and, while it’s unlikely to set your pants on fire, it feels potent enough to make motorway overtakes easy.