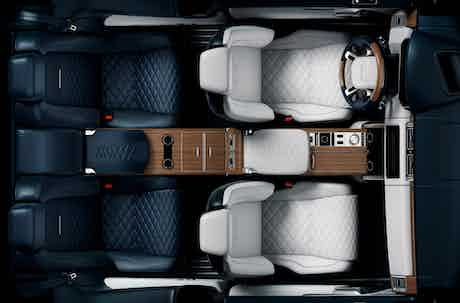 Land Rover will unveil a limited-edition three-door version of the Range Rover in Geneva, these interior pics give a hint of what’s to come

Land Rover will reveal a limited-edition two-door coupe version of the Range Rover at the Geneva Motor Show in March. Details are thin on the ground, but only 999 examples of the four-seater will be built, and they’ll be hand assembled by the brand’s Special Vehicle Operations – the department responsible for bespoke vehicles such as the Defender in the James Bond film, Spectre.

The main, top-down image confirms that the SV Coupe will only have two doors, harking back to the original Range Rover released in 1970. It has four seats and a wood-trimmed centre console that runs the length of the cabin, complete with leather armrests for front and rear passengers.

As well as the usual mega-comfy leather seats, the SV Coupe’s cabin has a digital display for the driver instead of traditional dials, and the adjustable central infotainment screen from the Velar. You’ll be able to adjust the climate controls using a third lower screen, and rear passengers will have their own climate controls.

There’s a huge range of personalisation options for the SV Coupe’s interior, including the two-tone front and rear seats shown in the photo above. Wooden trims for the centre console and steering wheel will also be available, and there’s a chance you’ll have the choice of leather-free, animal-friendly Kvadrat textile upholstery.

There’s no official word on engines, but considering how rare the SV Coupe will be it’ll likely only be offered with a powerful petrol V8 engine with around 550hp. It’ll likely give you a sportier driving experience than the regular Range Rover, and will have some of the Range Rover SVR’s suspension technology to give it sharper handling to back up its looks.