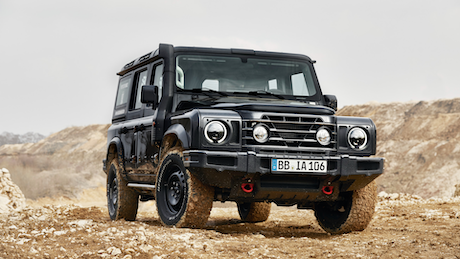 The new INEOS Grenadier is on sale now. This eye-catching 4×4 comes with serious go-anywhere capabilities and a selection of BMW engines. Read on for full details.

You can order the new INEOS Grenadier now. Entry-level cars will set you back £49,000 while top-spec models cost £59,000. Production is set to start in July this year.

That’s significantly less than a top-spec Land Rover Defender or Mercedes G-Class costs – you can easily spend more than £100,000 on a range-topping example of those cars.

The new INEOS Grenadier is available in four different versions. There’s a two-seater Utility Wagon, a five-seater station wagon and a pair of range-topping Trialmaster and Fieldmaster versions. All Grenadier models come with either a 3.0-litre straight-six petrol or diesel engine from BMW.

The basic two-seater commercial version costs £49,000. For this, you get a stripped out off-roader with permanent all-wheel-drive and enough space in the rear for a Euro pallet.

If you don’t plan to haul heavy building materials, you can buy the Grenadier with a set of back seats instead. These five-seat versions will set you back £52,000.

If you’re planning to do regular off-roading you’ll want to check out the Grenadier Trialmaster Edition. This comes as standard with INEOS’s ‘Rough Pack’ featuring front and rear locking differential, all-terrain tyres, a snorkel and an auxiliary battery.

This model also gets the Smooth pack, which includes luxuries such as a reversing camera, heated door mirrors and USB outlets. The Trailmaster costs £59,000.

If it’s a bit of added luxury you want, then you’ll want the Fieldmaster Edition. This gets the Smooth Pack as standard and adds heated leather seats, 17-inch alloy wheels and carpet floor mats. You also get some snazzy ‘Safari’ roof windows.

The Grenadier Filedmaster Edition will set you back £59,000 – that’s the same as the Trailmster Edition costs.

All models of the INEOS Grenadier are available with a comprehensive list of off-roading accessories, as well as pre-wired electrical connections for things like spotlights and winches.

Fans of the old Land Rover Defender may get a sense of deja vu looking at the new INEOS Grenadier. It has a similar boxy and simple design, you could say it’s the car that the new Defender should have been.

In its most basic form, the Grenadier gets LED front lights, a chunky front bumper and steel wheels. It’s a no-frills, rugged design that looks purposeful and ready to take on anything

It’s just as boxy at the back, too. The simple circular taillights, squared-off boot opening and door-mounted spare wheel have a strong retro vibe that’s missing from most modern 4x4s. The car above is the Fieldmaster Edition, meaning it gets some snazzy-looking alloy wheels instead of the standard steel items.

The function-over-form approach is carried through to the interior of the Ineos Grenadier as well. The layout is clear and simple and only top-spec Fieldmaster Edition cars come with plush leather trim.

You get five seats made by Recaro, flooring lined in rubber with drain plugs to hose it out, loads of grab handles for your passengers and some overhead controls for adjusting the differential settings.

That said, the interior isn’t as bare-bones as the Grenadier’s retro exterior design might suggest. You get a 12.3-inch touchscreen infotainment system with Apple CarPlay and Android Auto, complete with a set of physical buttons so you can operate it without smearing the screen in muck after a muddy adventure.

You’ve got a choice of a petrol or diesel engine in the Ineos Grenadier, with both 3.0-litre six-cylinder units coming from BMW.

They’re also linked up to an eight-speed automatic gearbox, and send power through a permanent all-wheel-drive system. This allows for optimum grip when off-roading, though comes at the cost of on-road efficiency.

Check out the top 4x4s available on carwow. If you’re looking for an easy way to change you car, carwow is the place to go. You can sell your old car for a fair price, as well as get a great deal on a new one, all though our network of trusted dealers and all from the comfort of your own home. Tap the button below to get started today.