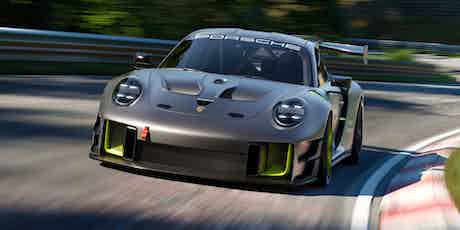 This is the Porsche 911 GT2 RS Clubsport 25, the latest track-only special from the German sports car icons.

You may remember the GT2 RS Clubsport from 2018. This is essentially that car, but complete with a new look to celebrate the 25th anniversary of Manthey-Racing GmbH — one of Porsche’s long-standing customer racing teams.

Just as with the car from 2018, the Porsche 911 GT2 RS Clubsport 25 is laden with aggressive aerodynamics parts to improve on-track performance.

Those include the enormous front splitter, hugely bolstered wheel arches and the picnic table of a rear wing slapped on the back of the car.

It gets some updates too to improve cooling, namely the new front bumper with new intakes plus some new ducts on the bonnet.

It gets a new satin grey and green livery as well, inspired by the Porsche 911 GT3 R that Manthey competes with — most recently winning the Nurburgring 24 Hours race.

Carried over for the Porsche 911 GT2 RS Clubsport 25 is a 3.8-litre, twin-turbocharged flat-six engine producing 700hp and 750Nm of torque.

That’s dumped to the rear wheels through a seven-speed PDK automatic gearbox.

No word on how that translates to performance — that’s probably more based on however you decide to set it up for certain circuits.

Just 30 examples of the Porsche 911 GT2 RS Clubsport 25 are set for production and, in reality, all have probably sold by the time you’ve made it to this point on the page.

If you fancy your chances though, you can email 911GT2RSClubsport25@porsche.de asking for one. As long as you have £445,000 sitting around — and that’s before taxes.