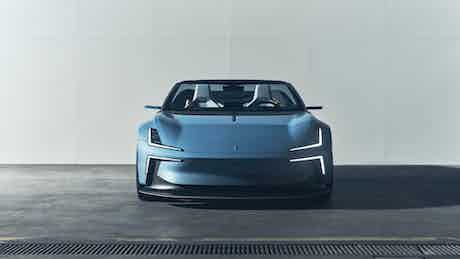 Polestar has revealed a new electric roadster concept called the O2. It’s a slick electric four-seater sports car with a design inspired by the Precept concept and upcoming Polestar 5. Read on for all you need to know.

The Polestar O2 concept has been revealed, an electric roadster that shows what future electric cars from the Swedish brand could look like, including the upcoming Polestar 5.

This alternative to the Mercedes-AMG SL and BMW 8-Series Cabriolet promises to be packed with tech and sustainably built.

The new Polestar O2 concept carries a lot of its design over from the Precept concept from a couple of years ago, and this is no bad thing.

The front end has a similar, sharp LED light design with no grille cluttering things up. This minimalist theme carries on over the whole car.

The rear end is dominated by a full-width light bar and very slim LED tail lights. There’s also a metal folding hard top that gives it a more coupe-like side profile.

The interior of the Polestar O2 seems to have been lifted from the previous Precept concept. This means a fairly minimalist design with a huge screen in the middle of the dashboard, similar to the one you get in a new Polestar 2.

A ‘Cinematic drone’ also features behind the rear seats which can be deployed on the move. This is designed to allow you to take photos and videos for social media.

No official details have been revealed with regards to the batteries on offer in the O2 concept, however it’s safe to assume that they’ll be shared with the upcoming Polestar 5.

It’s rumoured that the Polestar 5 could have 310 miles of range, along with a dual-motor all-wheel-drive setup.

The Polestar O2 is just a concept for now, so there’s no word as to when it will go on sale. The Polestar 5 is set to be released in 2024, so this convertible could follow soon after.

Looking for a great deal on a convertible car? Check out the latest offers on carwow. Not sure what you want? Tap the button below to get help choosing the right model for you.