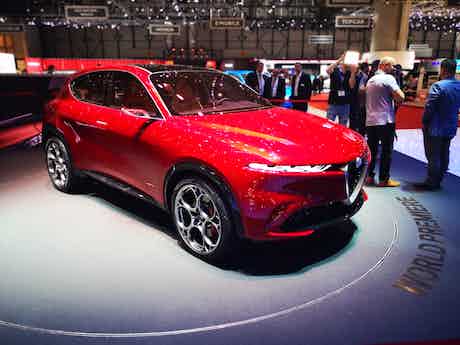 The Alfa Romeo Tonale is a small SUV with a hearty dose of Latin spirit – keep reading for all you need to know about Alfa’s Audi Q3 beater.

The 2020 Alfa Romeo Tonale was one of the surprises of the Geneva motor show and it’s fair to say concrete details are still a little thin on the ground. That said, it’s sized to be an alternative to cars like the Audi Q3 and Volvo XC40 so you can expect it to have a starting price of around £28,000 rising to closer to £40,000 for the petrol-electric hybrid model you’ll read about later. You can expect the Alfa to go on sale towards the end of 2020.

Style is what Alfa Romeo’s all about so you can expect the 2020 Alfa Romeo Tonale to look almost identical to this jaw-dropping show car. That means you’ll get Alfa’s distinctive triangular grille which cuts deep into the car’s front bumper. Its size will be emphasised by slim-line LEDs that give the car a distinctive light signature at night.  The show car’s sculpted sides are another feature you can expect to be carried over to the production car complete with a crease that runs all the way from the front wheel to the distinctive LED light bar at the rear of the car. Factor in 18-inch alloy wheels, rising to 20-inch versions of the ‘phone dial’ style wheels seen here, and you’d never guess that the 2020 Alfa Romeo Tonale is actually based on the boxy Jeep Renegade (Alfa and Jeep are both owned by Fiat Chrysler).

You can expect Alfa’s engineers to go to similar lengths to give the Tonale a character all of its own when you get behind the wheel. It’ll likely get quicker steering than the Renegade to make it feel more agile in bends and stiffer suspension that’ll stop it feeling like it might fall over if you’re barreling into corners with a little too much enthusiasm.

While there’s no news on a fast Quadrifoglio model, what does seem certain is that the Tonale will be available as a plug-in hybrid. It’ll use the same tech as the Jeep Renegade plug-in hybrid that was also revealed at Geneva. That means the 2020 Alfa Romeo Tonale will use a 1.3-litre petrol engine at the front boosted by an electric motor at the rear wheels. In the Jeep, that combination provides up to 239hp and 0-62mph in less than seven seconds. The Alfa Romeo, then, should be able to match that and, like the Jeep, would be exempt from paying inner-city tariffs such as London’s Congestion Charge.

As well as being relatively green, the Tonale will also be practical. Its tall SUV body should translate into enough interior space for four adults to sit in comfort and while the boot won’t be huge, its boxy shape should allow you to fit two large suitcases with relative ease.

Keep yourself up-to-date with all the latest on the Alfa Romeo Tonale by signing up to the carwow newsletter at the top of your screen.