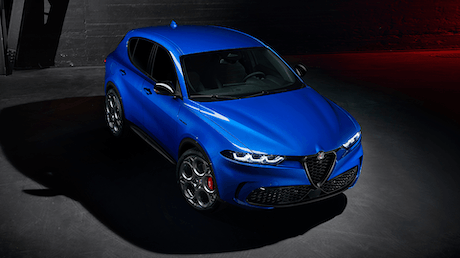 This is Alfa Romeo’s new entry-level SUV that’ll go on sale in September 2022. Read on for full details.

This is the new Alfa Romeo Tonale. It’s a brand-new SUV from the Italian brand and is an alternative to the likes of the Audi Q2 and BMW X1.

Sitting below the Stelvio in Alfa’s line-up, the Tonale brings new tech and the choice of petrol- or plug-in hybrid engines. Sales will start in September, though pricing is yet to be confirmed.

There’s no mistaking the Alfa Romeo Tonale for another brand’s car, is there?

The usual Alfa traits are there — the triangular grille, slim LED headlights and a broad black-painted air intake.

As standard, the Tonale will come with 19-inch alloy wheels, but you’ll have to option of 19- or 20-inch units if you’d prefer.

A new feature you won’t have seen on the likes of the Alfa Romeo Stelvio is the full-width LED taillight — broken only by a badge in the centre. Two air vents sit where you might normally expect to see exhausts, to0 – no fakery here.

Rather than follow the all-digital dashboard trend, Alfa Romeo has given the Tonale plenty of physical buttons. Sure, there’s a central 10.25-inch touchscreen (with Apple CarPlay and Android Auto) in the centre but you’ll control most of the car’s features through a set of conventional buttons underneath.

It almost looks over-the-top compared with some of today’s simplistic interiors but it could prove easier to use than the on-screen buttons in a Volvo XC40 – especially on the move.

One thing’s for sure, the Tonale’s interior looks seriously posh. It’s covered with leather and trimmed with aluminium bits, with suede-like Alcantara also making an appearance on the seats.

You’ll spot digital dials too. These can be tweaked to show different information about the car as and when you need it.

That’s par for the course these days — but more interestingly its virtual dials mimic those of classic Alfas like the Giulia Super and GT Junior.

You’ll get the choice of three engines for the Alfa Romeo Tonale in the UK — two petrol and one plug-in hybrid.

Both petrol units are based on a 1.5-litre four-cylinder engine linked up to a 48-volt electric motor developing a total of 130hp or 160hp (depending on the model you pick). Both drive the front wheels only and come with a seven-speed dual-clutch automatic gearbox.

Meanwhile, the plug-in hybrid pairs up a smaller 1.3-litre engine to an electric motor for a total of 275hp. It uses the same gearbox as the petrol versions but comes with four-wheel drive as standard.

With a 15.5kWh battery onboard, Alfa claims this Tonale can manage just shy of 50 miles of electric-only driving.

Essentially, this means you’ll be getting adaptive cruise control with a self-centring system. When active, the car will be able to adjust the steering to keep you in the middle of a lane.

Each Tonale will also be equipped with its own unique non-fungible token (NFT). This will be used to record data on the car and certify its mileage.

Alfa reckons this should help residual values down the line, though you won’t be able to sell the NFT separate from the car.

You’ll be able to order an Alfa Romeo Tonale from September, though no word yet on pricing.

Expect it to come in a bit below the Alfa Romeo Stelvio, which can be had from £45,249.

Take a look at the latest Alfa Romeo deals, or compare SUVs on sale now