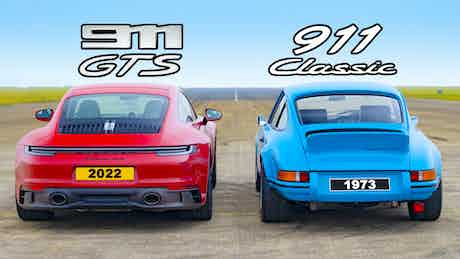 Obviously, we’re not talking about a standard 1979 Porsche, but more on that after we go through what Mat’s driving today; the new Porsche 911 GTS.

It has a 3.0-litre twin-turbocharged flat-six engine with 480hp and 570Nm of torque. This is goes to the rear wheels via a seven-speed manual gearbox. This could hamper the GTS off the line, as could its not-inconsiderable 1,510kg wight.

The classic Porsche 911 SC weighs a bit less than that, tipping the scales at 1,275kg, despite the fact it’s hiding something pretty special in the back. It has the electric drive system from a Tesla on board, meaning it puts out 450hp and 400Nm of torque. It’s also rear-wheel-drive, but there’s no gearbox to worry about.

So which car will come out on top? Will the light-weight EV take the top spot? Or will the grunt of the new GTS be enough? You’ll have to watch the video to find out.

Looking for a great deal on your next car? Then head over to the carwow configurator. Simply build your ideal model, then sit back and relax as our trusted dealers come back to you with their best prices. Need some help choosing the right car? Tap the button below for advice on which one will be right for you.