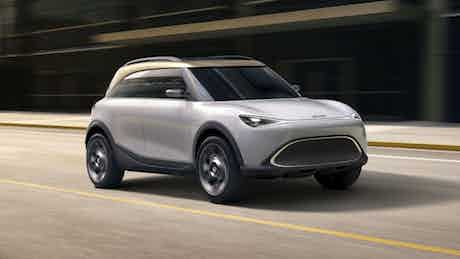 The Smart Concept #1 showcases a new chapter for the Smart brand as it expands into the premium electric car market with vehicles based on this SUV concept.

Designed in collaboration with Geely, the Smart Concept #1 gives you an idea of what to expect from a future production car that’ll be a stylish alternative to the Peugeot e-2008.

Fans of the current range of Smart cars will be hard-pressed to find any visual design cues that link this new Concept #1 SUV to its predecessors.

Aside from the increase in size (it is about as large as a Mini Countryman), the new car’s smoothed-off grille and narrow headlights joined with a thin LED light strip are a completely new look for the brand.

The rear has the same LED taillight cluster design and there is not one sharp edge or protrusion (aside from the small side mirrors) to be found on the entire car. The full-length panoramic sunroof is separated by a rounded gold band that’s supposed to make it look as though the roof is floating above the car’s body.

Daimler’s Chief Design Officer, Gorden Wagener, confirmed that the Smart Concept #1 is based on a pre-production Smart EV SUV body, suggesting that the finished car will look very similar to this show car when it goes on sale in the coming years.

The new Smart’s interior looks just as bold as the outside. The dashboard and centre console blend seamlessly into each other with hardly a button in sight; a 12.8-inch centrally mounted touchscreen display will likely control the majority of in-car functions.

The rear doors are hinged backwards and there’s no metal support between the front doors and the backwards-opening rear doors. The production car will likely come with a more conventional design with a metal pillar beside the front seats.

This concept only has four seats, but the finished car will seat five.

The Concept #1 SUV will be built as a joint venture between Chinese manufacturer Geely and Mercedes-Benz (who owns the Smart brand.)

While Smart has yet to confirm what will power their new SUV, the Geely layout allows for up to three electric motors and a range of up to 430-miles using the more optimistic NEDC testing procedures.

The more stringent WLTP testing should cut that figure down somewhat, but the Concept #1 should offer at least 200 miles of range – significantly more than the current Smart EQ ForFour’s 81-mile effort.

Smart says that the Concept #1 SUV is a near-production study and the final product should be released during the course of 2022 with sales commencing soon after.

Seeing as this will be a completely new model in the Smart lineup-with far more power, range and space than today’s EQ ForTowo and EQ ForFour models, you can expect the new car to cost more – likely around the £35,000 mark to take advantage of the Government’s plug-in car grant.

Can’t wait for this new car to go on sale? Check out the top 10 electric cars on sale or compare the latest Smart car deals available through carwow.