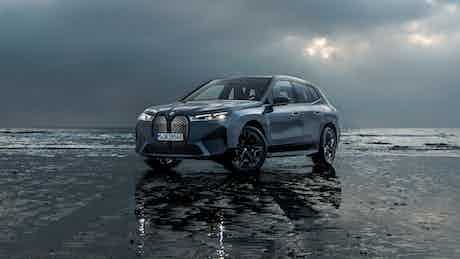 The new BMW iX M60 has been revealed. It’s the third variant of the brand’s flagship electric SUV and the most powerful electric car BMW has ever made. Read on for all you need to know.

The BMW iX M60 has officially debuted ahead of it going on sale in the Summer. The performance version of BMW’s flagship EV will have 619hp and will do 0-60 in 3.8 seconds.

Check out the best EVs on carwow

The new BMW iX M60 will be the fastest version of the luxury EV. It has two electric motors which produce a combined 619hp and 1,100Nm of torque. This means it will do 0-60mph in just 3.8 seconds, about the same as a BMW M3 Competition, which is very impressive for a heavy SUV like this.

The range doesn’t suffer too much as a result of the added performance. BMW claims the new iX M60 has 357 miles of range, which is only around 10 miles less than the iX M50 model.

The overall appearance of the new BMW iX M60 hasn’t changed a great deal over the existing models, but you do get some styling upgrades to let others know that you have the top-of-the-range car.

There are some unique 22-inch alloy wheels, along with blue brake calipers set behind them. You can also specify some new bronze trim for the grille and window surrounds, as well as gloss black details.

Beyond this, it’s BMW iX business as usual. This means you still have the enormous grills upfront with slim LED lights used front adn rear.

As you’d expect, the interior design of the BMW iX M60 is largely unchanged from the standard car. You do get more equipment as standard though.

For example, the iX M60 gets a premium Bowers and Wilkins sound system, an upgraded infotainment system, heated and ventilated seats and four-zone climate control.

As with the standard iX, the interior has been created with sustainable materials. The base of the floor is made of recycled fishing nets, the leather is tanned with olive tree leaf extract and the wood used comes from sustainable sources.

The new BMW iX M60 will go on sale in the summer of 2022, with the first cars expected to be delivered by the end of the year.

Can’t wait for the BMW iX M60? Check out deals on the standard BMW iX through carwow to see how much you could save. Alternatively, check out the configurator to build your ideal electric car and get great offers back from our trusted dealers.

Go to the carwow configurator