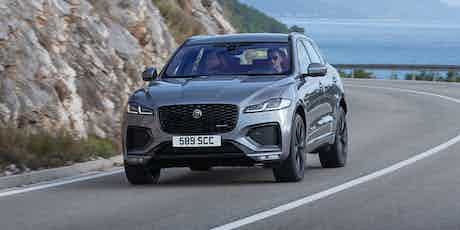 The Jaguar F-Pace has been updated for 2021 with some styling tweaks and a range of new hybrid engines. Read on for full details.

The sporty Jaguar F-Pace SUV has gone green(er) for 2021 with the introduction of new hybrid models. These use similar engines and hybrid systems to the new Land Rover Discovery Sport hybrid and Range Rover Evoque hybrid, wrapped up in a revised version of the F-Pace’s sporty design.

The new Jaguar F-Pace doesn’t look radically different from the car it replaces, but a new bonnet, remodelled bumpers and updated all-LED headlights help keep it looking fresh. The grille has seen a fairly significant change – you’ll now be able to get the F-Pace with a set of shiny chrome inserts in place of the outgoing car’s simpler plain black finish. Well, in the US, anyway.

From the side, the new car looks almost identical to the current model, but new brake lights, a redesigned rear bumper and some new exhaust tips make sure you can tell it apart from the rear. The number plate now sites in a wider recess in the boot lid, too – it’s a subtle tweak, but it helps the new F-Pace look a little less top-heavy than the outgoing car.

One of the outgoing Jaguar F-Pace’s biggest shortcomings was that it felt pretty cheap inside for an upmarket SUV – even in top-spec supercharged SVR guise. Jaguar claims it’s made the new car feel more luxurious inside thanks to a selection of new materials including magnesium, unvarnished wood and laser-etched metal.

There’s some extra storage space under the new Jaguar F-Pace’s revised centre console and you can get it with an optional wireless phone charger. The F-Pace now comes with an 11.4-inch touchscreen infotainment system instead of the outgoing car’s optional 10.3-inch screen and the graphics on the 12.3-inch digital driver’s display have been revamped.

The new Jaguar F-Pace will be available with three diesel and three petrol engines – all with eight-speed automatic gearboxes and four-wheel drive. All three diesel engines come with a mild-hybrid system that uses a small electric motor to give the engine a boost when you accelerate hard and help reduce fuel consumption when you’re cruising.

Check out the best hybrid SUVs

The only non-hybrid car in the new Jaguar F-Pace range is the 250hp 2.0-litre four-cylinder petrol model. This car will return a claimed 30.4mpg. There’s also a plug-in hybrid version that uses the same engine along with a beefy electric motor to produce 404hp. Jaguar claims this F-Pace delivers 130.2mpg and can manage 33 miles of driving between charges.

The 400hp 3.0-litre six-cylinder petrol model produces almost as much power as the plug-in hybrid but it won’t have a hope of matching its three-figure fuel economy figure – despite coming with the same mild-hybrid tech as the new diesel models.

Head over to carwow’s Jaguar F-Pace deals page to see the latest offers or check out the best hybrid suvs on sale.