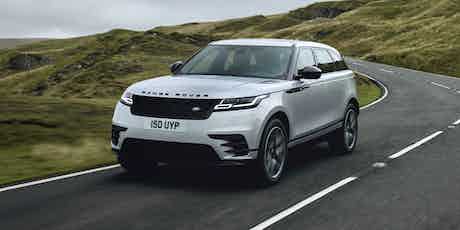 The Range Rover Velar has been tweaked for 2021 with a range of new engines, including a plug-in hybrid system.

The Range Rover Velar follows the Land Rover Discovery Sport and the Range Rover Evoque in adopting Land Rover’s latest range of mild-hybrid and plug-in hybrid engines, along with a few infotainment tweaks. It’s on sale now, priced from £46,110.

The big news for the 2021 Range Rover Velar is the announcement of a new hybrid model. This P400e comes with the same hybrid system as the recently revealed Land Rover Defender plug-in hybrid and combines a 300hp 2.0-litre four-cylinder petrol engine with a 143hp electric motor to produce a total of 404hp.

The Range Rover Velar plug-in hybrid’s 17.1kW underfloor battery pack holds enough charge to drive the new model for 33 miles by itself and can be recharged from 0% to 80% full in half an hour using a 50kW public fast charger. Charging using a 7kW wall charger will take one hour and 40 minutes.

The new Range Rover Velar will also be available with a pair of new 3.0-litre six-cylinder engines in 400hp P400 petrol and 300hp D300 diesel forms. Both come with a 48-volt mild-hybrid system that uses a compact electric motor to give the engine a boost when you accelerate and help reduce fuel consumption when you’re cruising at speed.

This 48V mild-hybrid tech will also feature on a 204hp four-cylinder 2.0-litre diesel engine (called the D200) that’ll also be available in the Velar for the first time. Air suspension, which helps the Velar deal with uneven road surfaces even better, is optional on this 2.0-litre diesel model but comes as standard in every 3.0-litre six-cylinder Velar.

The Range Rover Velar’s infotainment system has also been revamped. Now it comes with Land Rover’s ‘Pivi’ and ‘Pivi Pro’ systems. These come with sharper graphics than the outgoing Velar’s touchscreen and adds a built-in internet connection that means the car’s software can be updated automatically.

The updated Range Rover Velar is on sale now, priced from £46,110 for a D200 diesel model. Land Rover is yet to confirm how much the plug-in hybrid and six-cylinder cars will cost, but they’ll all set you back more than £50,000.