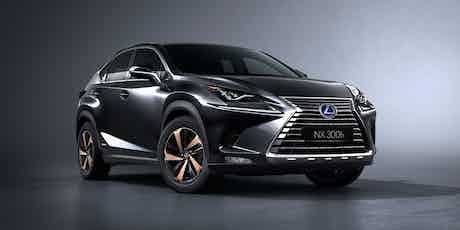 Lexus has revealed a facelifted version of its already eye-catching NX SUV at the 2017 Shanghai Motor Show. This revised Honda CR-V and Toyota RAV4 rival now looks edgier than ever and will come with extra safety kit as standard when it goes on sale in 2018.

Lexus has chosen not to modify the outgoing NX’s extremely sharp edges or angular features too much, instead it’s focused on subtly tweaking the headlights to look more like the firm’s LC coupe flagship. New satin black trim and a sportier rear bumper with square chrome details should further help you tell this new model apart from the car it’ll replace.

Inside, drivers will be treated to a new 10.3-inch infotainment display that should be easier to use thanks to a larger centre-console-mounted touchpad. A metallic finish for the car’s heating and ventilation controls should help the cabin feel slightly more upmarket than before while the re-positioned USB sockets will reportedly charge your smartphone faster than in the old car, too. Also new for the facelifted model is a foot-operated electronic bootlid release.

Both the outgoing NX’s 2.0-litre petrol engine and 2.5-litre petrol-hybrid engines will be offered on the new model. Neither performance nor fuel economy are expected to change but Lexus has re-tuned the car’s suspension – using components borrowed from the LC 500’s adaptive setup – and added more sound-deadening to make it more comfortable and quieter on the more than the old NX.

Lexus’ Safety System + will now be fitted as standard to all NX models. This feature includes adaptive cruise control, lane departure warning, automatic high beam assist and pre-collision detection systems to help keep you safe and minimise the effects of an accident.